As the level of the Euphrates River drops, Syrian civilians on its banks pay the price

A photo shows the Euphrates Reservoir (al-Assad Lake) and the Jaabar Water Station in the countryside of Raqqa province, 25/4/2021 (Syria Direct)

AMMAN — The water in the Euphrates Reservoir (al-Assad Lake) in the western countryside of Raqqa province has reached its lowest levels since the Syrian regime lost control of the area in 2013, portending a humanitarian disaster and service provision crisis.

On April 29, the water level in the reservoir fell to 298.83 meters above sea level, a decrease of five meters from its average level of 304 meters, a technician at the dam told Syria Direct, requesting anonymity as he is not authorized to speak to the media. This time last year, the water level was 301.06 meters.

The Dams Administration of the Kurdish-dominated Autonomous Administration of North and East Syria (AANES) has warned that a “humanitarian disaster awaits the region, following the pollution of the Euphrates River after its water level went down to its lowest point.” The AANES accuses Turkey of blocking the flow of water to Syria.

A decrease in water flowing from Turkey from 500 cubic meters per second—the supply provided for by the Protocol for Technical and Economic Cooperation between Syria and Turkey—to 200 cubic meters per second has caused a drop in the Euphrates River in Syria. In turn, that has reduced the water level of the lakes behind the river’s three dams: the Tishreen, Euphrates and Baath dams. The result is a water and electricity crisis in northeast Syria.

The floodgates should be opened to drain excess water if the level reaches 304 meters or above. However, a drop to 299 meters or below puts the hydroelectric station at the Euphrates Reservoir out of service, meaning that no electricity can be generated.

“We are monitoring a decrease of five centimeters per day in the water level of the Euphrates Reservoir, which is a fast-paced decrease,” an official at the Euphrates Dam Administration told Syria Direct. “The water supply flowing from Turkey is not currently enough to run the dams at the optimal production capacity.”

For that reason, the management of the Euphrates Dam is working to ration electricity in Raqqa province as a whole. Electricity runs for eight hours a day in the city of Tabqa in the western countryside of Raqqa, six hours in the al-Jarniyah area north of Tabqa, and only four hours in the al-Mansourah area and its villages. The city of Raqqa also receives only four hours of electricity. Meanwhile, the al-Karamah area of the eastern countryside receives no more than two hours per day, according to the dam official. All this is “to maintain a sufficient water level to supply irrigation projects and water pumping stations.”

The official warned that “the continued decrease in the water level in this way during the current month of May could lead to electricity being limited to the service lines only: the lines feeding water stations, irrigation and services such as hospitals, mills and bakeries.” 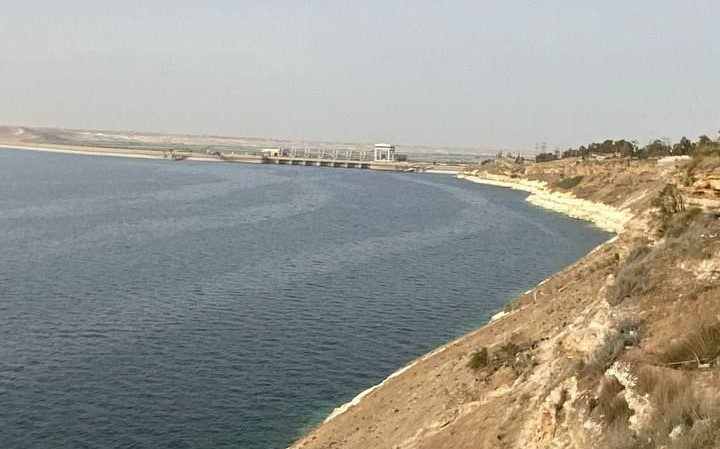 A photo shows the receding water level of the Euphrates Reservoir (al-Assad Lake) in Tabqa, with the dam visible in the background, 4/5/2021 (Syria Direct)

Seven water pumping stations for drinking water in the countryside of Tabqa —the Jaabar, Tawi, Shamseddin, al-Bouassi, al-Kareen, Ayed, and al-Jrafaat stations—rely on the water level of the Euphrates Reservoir as they are infiltration wells: a cement mass surrounded by a large layer of sand and gravel to purify the water.

To operate, these stations need water levels up to 302 meters above sea level in the Euphrates Reservoir. If “the water level falls below this, their capacity is weakened until they go out of service because their engines cannot draw water,” a source from the Tabqa Water Directorate told Syria Direct.

Indeed, “three stations have gone out of service: the Jaabar, al-Kareen and Ayed [stations]. These provide drinking water to around 25,000 people,” the source added. “The rest of the stations have been switched to operate at 20 percent of their actual capacity after the length of the intake pipes was increased.” If the water level continues to fall, “all the stations will go out of service.”

More serious still is that some of these stations feed into others, called lift stations. For example, the al-Jrafat Station feeds into the main Tabqa Water Station, and the Jaabar Station feeds the al-Mahmoudli and al-Tarkah Stations in the northern Tabqa countryside. The Shamseddin Water Station feeds the al-Jarniyah and Tal Othman Stations northwest of Tabqa. This means that these stations, too, are impacted by the water level of the Euphrates Dam and go out of service alongside the mother stations that feed into them.

Residents of villages that benefited from stations that have gone out of service now rely on water tankers to meet their needs, including drinking water. A 200-liter barrel costs SYP 1,000 ($0.35 according to the parallel market exchange rate). The Raqqa Civil Council’s Water Office has appealed to residents of the area to ration water and not waste it.

“The land production of wheat will be halved this season due to insufficient irrigation water,” a farmer in the al-Wadyan irrigation project in the western Raqqa countryside told Syria Direct. He got access to “irrigation two rather than four times because of the receding water level of the Euphrates.”

According to the farmer, the wheat crop needs to be watered five times, once every 15 days, from early March through mid-May. But “because of the lack of water, the crop is watered once every 25 days,” causing “weak and lightweight wheat spikes, reflecting on the quality of the crop.”

An agricultural expert in Raqqa province explained to Syria Direct that the reduction in the water level of the Euphrates Reservoir causes the water to go down in irrigation canals, as they are fed by water through the floodgate of the reservoir’s irrigation outlet. “The decrease of the level, in turn, reduces the hours of operation for irrigation water pumping stations, and consequently spaces out the irrigation periods.”

Due to the low water level of the Euphrates Reservoir, the pumping stations are running for 12 hours that might be interspersed with rationing periods. But they should run for 18 hours at a minimum to meet the needs of the area’s farmers, the agricultural expert said. He warned that “the drop in the Euphrates River’s water level impacts most of the irrigation projects, which cover an area of around 86,000 hectares distributed among ten projects in areas controlled by the Syrian Democratic Forces [SDF].”

While the wheat crop has already been hit by the reduced flow of Euphrates water from Turkey, the continued water crisis in northeast Syria could reflect on the cotton crop, too. Multiple farmers expressed their worry to Syria Direct, as cotton needs to be watered between eight and ten times from May through mid-August or once every ten days.

“Growing cotton is a big risk in these conditions,” another farmer said, especially with “the fuel crisis in northeast Syria, too.”

If Turkey bears responsibility for the water crisis that northeast Syria is going through, then “the lack of an administration capable of dealing with the crises in the dam is an additional factor,” the Euphrates Dam technician said. “It is the administration’s duty to implement a consumption plan that is commensurate with the existing water stock and ration its use to ensure that it does not reach these low levels, which are unprecedented in the Euphrates Reservoir.”

Even if Turkey were to increase the amount of water flowing to the lake, the water crisis in northeast Syria would likely persist for some time, according to the technician. “If the flow of water from Turkey returned to the agreed-upon levels of 500 cubic meters per second, it would still take around three months to return the water level of the lake to its normal levels of between 303 and 304 meters” above sea level, he said.

“So the possibility of its return does not immediately solve the problem.”