ERBIL — Men scurry about among a handful of standing pines and razed stumps, while trees fall to the ground in a swirl of dust to the sound of buzzing chainsaws: These images, shot near Lake Maydanki in the Afrin region of northwestern Syria, sparked shock and horror as they spread on social media this week.

A video shows men felling trees and loading them onto trucks along the shore of Maydanki Lake in the Afrin region of northwestern Aleppo province, 31/8/2022 (Facebook)

“Thousands of trees were felled today,” Faiz Aldoghim, a journalist with the pro-opposition Syria TV channel said in a video report from Maydanki Lake on August 31. “This is not the work of individuals only—three or four thousand trees are gone,” he said, his voice loaded with emotion. “We ask for clarification from those responsible. This is an extremely sad day.”

Photos shared by several local TV channels and relayed by dozens of activists on Wednesday, show the lake’s shores “before” and “after” apparent logging: from dense forest to dry, brown earth. It was not immediately clear how extensive the tree clearing filmed on August 31 was, or over what period these areas were deforested.

Syria has suffered extensive deforestation over the past two decades, losing at least one fifth of its forest cover between 2000 and 2019. But this latest incident, which took place in a nature reserve, has reactivated the anger of local communities and activists in Afrin, some of whom blame the Turkish-backed Syrian opposition factions who control the area for the logging.

A place for leisure

Many Syrians expressed grief on social media after the images went viral. “I am sure that this is Maydanki Lake, I recognize it very well,” Nurhat Hesen, a Kurdish journalist displaced from Afrin in 2018 during Turkey’s Operation Olive Branch, told Syria Direct.

Maydanki Lake was created by Syrian authorities in the early 2000s to store drinking and irrigation water and generate electricity through the hydroelectric Afrin Dam. In 2004, the lake and its surroundings were declared a protected area and quickly became a popular recreation spot for locals.

“We used to visit the area regularly, especially in the summer, we would go every week or two.  We would sit under the trees, and the kids would swim and play,” Ahmad Musto al-Kurdi, a Kurdish environmental activist from Afrin, told Syria Direct. “It was a place for leisure, known across the region.”

Now dry and dusty, this part of Maydanki Lake’s banks was once covered with trees. (Facebook)

Throughout much of the Syrian war, Afrin Dam was under the control of Kurdish groups affiliated with the Democratic Union Party (PYD), which Turkey considers an extension of the Kurdistan Workers Party (PKK), a guerrilla group fighting the Turkish state. But in 2018, Afrin and its surroundings were seized by the Turkish-backed Syrian National Army (SNA) during Operation Olive Branch, a Turkish cross-border military operation that aimed to roll back the influence of the PYD along the Turkish-Syrian border.

The operation allowed the Syrian National Army (SNA) to take control of several multiethnic areas of northern Syria, including Afrin, which used to host a Kurdish-majority population. Many of Afrin’s Kurds fled in the aftermath, to escape extortion and violence directed against their community.

In Afrin, 2018 also marked the acceleration of a years-long process of environmental degradation, partly linked to the arrival of tens of thousands of Syrians fleeing war in other parts of the country.

“At the end of 2018, thousands of displaced persons arrived in Afrin—from Ghouta, from the countryside of Homs, from all parts of Syria,” al-Kurdi added. “Where could they live? These people had left their home, their land, their shops and had nowhere to go. So they cleared the forests and settled in them.”

The clearing of forests or orchards to build homes for displaced people is common across northwestern Syria. This dynamic is particularly contested in Afrin, where several human rights organizations have accused Turkey of “demographic engineering” in formerly Kurdish-majority areas, as extensive settlements are built to host displaced Arab communities.

In this context, many activists directly blame Turkey and its proxies for environmental destruction in Afrin. “The shores of the lake were radiant with greenery before Turkey occupied the area,” Hesen said. “Even the small island in the middle of the lake is no longer the same, half of the trees are gone. The same thing happened in Afrin city: There were hundreds of trees above the Mahmudiya neighborhood,” he recalled. “Now they no longer exist, they have all been cut down.” 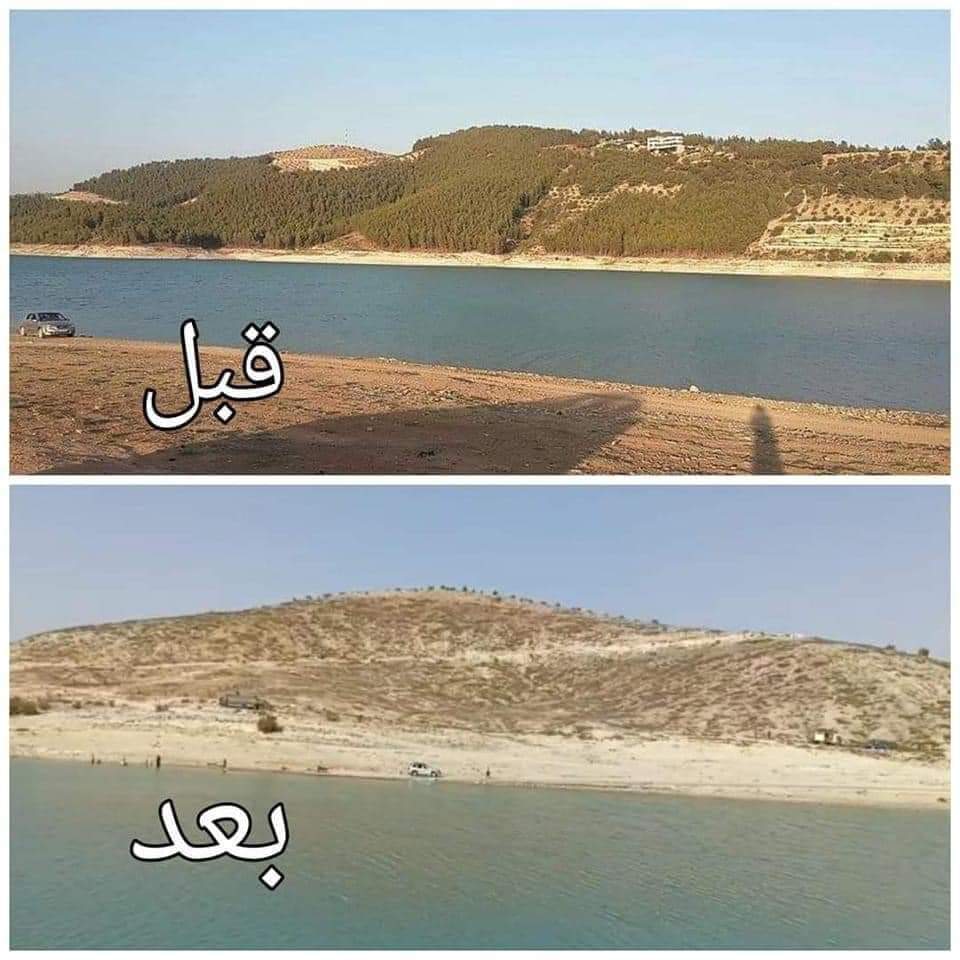 “Before” and “after”: photographs of Maydanki Lake, shared by activists on social media this week, show heavy deforestation. (Web)

Hesen accused the Turkish-backed Sultan Murad Division, an SNA faction composed mostly of ethnic Turkmen, of being behind the recent logging. One environmental activist from Afrin, who requested to remain anonymous for security reasons, echoed the charge. “Everyone knows that Sultan Murad is behind this, them and people in the area,” he told Syria Direct. “They hire displaced people and tell them to cut trees. They sell the wood and use the land.”

In one video circulating on social media, four men can be seen cutting down trees with a chainsaw at Maydanki Lake. Due to the video quality, it is not apparent whether or not they are wearing civilian clothing.

One Sultan Murad Division member told Syria Direct his faction was not involved in cutting trees this week, but did not rule out the involvement of other SNA groups or their members. “We are not responsible for what happened in Maydanki,” he said, requesting anonymity as he is not authorized to speak to the media. “There are several factions operating in the area.”

Certain fighters may participate in logging for economic reasons, but do so “as individuals, and do not represent their faction,” he said.

“Several people were arrested recently for wood cutting and were handed over to military justice,” the source added. “These are simply people who want to feed their families. The economic situation is very difficult. Trees are being cut down in many areas, and this has been going on for years.”

Syria Direct reached out to official SNA spokespeople for further comment, but did not receive a response in time for publication.

Turkey has been accused in the past of allowing, directly or indirectly, mass tree clearing to take place in Kurdish regions under its influence in Iraq and Syria.

In 2021, authorities in Iraqi Kurdistan said hundreds of hectares had been burnt and entire forests cleared near its northern border, where Turkey has built dozens of military outposts in recent years. Tree clearing, allegedly aimed at  building new roads to connect Turkish outposts, sparked outcry in Iraqi Kurdistan at the time as images of trucks loaded with logs of wood circulated on social media.

Looting, burning, cutting: How a decade of war has shrunk Syria’s forests

Some residents and activists claimed that, by removing trees, Turkey was “stealing” the valuable wood of centuries-old olive, walnut and plane trees. Open-source data analysis determined that some of the areas being cleared extended well beyond the surface needed by Turkey to build roads between military outposts.

In the absence of an official statement from local authorities and military factions, many questions remain about recent logging around Maydanki Lake. How many trees have been cut? By who? Who will benefit from the sale of the wood, located on state property in a formerly protected area?

For many displaced natives of Afrin, images of tree cutting and deforested areas are a painful reminder of the ongoing destruction of their lost land. “As we see in the painful videos that circulated yesterday, crimes against nature continue in Afrin, ” Hesen said.