In Damascus, students go back to school and families go without

A woman stands in front of a bookshop in the al-Baramka neighborhood of Damascus, 27/8/2022 (Habib Shehada/Syria Direct)

DAMASCUS — As fall approaches and students return to school in many countries, the month of September brings spring colors: brightly colored stationery, backpacks and school supplies for children of all ages. But for years, much of Syria has been an exception, including regime-controlled Damascus,  due to an unprecedented economic crisis.

Schools in Damascus and other regime-controlled areas of Syria opened their doors this past Sunday, September 4 to welcome students back for the 2022-2023 school year. An estimated 3.7 million students returned to classrooms this year, media sources close to Damascus reported.

In Syria, the back-to-school season, like holidays, revives markets as parents set aside money to buy everything their children need for an entire school year. In better economic times, this practice was the rule for most Syrians, with the exception of those living in abject poverty.

This year is different, said Abu Abdo, a 55-year-old Damascus resident and a father of five children, four of whom are school aged. His youngest child is old enough to start kindergarten this year, “but I couldn’t register him because I can’t afford the fees and additional expenses,” he told Syria Direct. Kindergarten is not part of Syria’s public school system, which starts with first grade.

For 23 years, Abu Abdo has worked at the Damascus Electricity Directorate under the Syrian Ministry of Electricity. Each month, he brings home SYP 175,000 ($39.50, according to the current black market exchange rate of SYP 4,400 to the dollar).

Before classes started this year, Abu Abdo visited the al-Thawra Street market in Damascus and came away with only four notebooks, “one for each of them, to cover all classes,” he said. “We’ll buy another when the notebook is finished.” Two of his children are in high school, the oldest entering his final year of public high school (baccalaureate), while the second oldest is in 11th grade.

As schools reopened in Damascus this past Sunday, the latest manifestation of  residents’ economic suffering was their inability to buy everything they need to support their children’s right to an education, a right enshrined in Articles 18 and 26 of the Universal Declaration of Human Rights, and in Article 29 of the Syrian Constitution, which holds that “Education shall be a right guaranteed by the state, and it is free at all levels.”

But while public education is free, the costs surrounding it are going up. Abu Abdo had to buy the bare minimum of what his children need and abandon the idea of enrolling his youngest son in kindergarten. Even so, he paid nearly half a month’s salary for his oldest son’s books and supplies, though he did not buy him a school uniform or shoes, and the family recycled and repaired some old supplies—such as bags and shoes—for the other children.

What Abu Abdo could afford falls short of the minimum stationery requirements for a public high school student identified by Syria’s Ministry of Education: three notebooks, a foreign language notebook and a drawing and coloring pad.

A number of parents and guardians Syria Direct spoke to complained about the high cost of stationery and school uniforms, as well as the recent hike in the cost of schoolbooks. Increased costs come amid a strangling cost of living crisis in regime-controlled areas due to several factors and the plunging exchange rate of the Syrian pound against the US dollar. The Syrian pound has lost more than 20 percent of its value since the beginning of 2022 alone.

Syria’s state-owned Tishreen newspaper reported on August 17 that the price of school supplies is up 50-70 percent over 2021. Ali Abboud, Director of the Publications Organization under the Ministry of Education, which prints public school textbooks, described this month’s price increase as a “small difference” from last year, speaking to local media on August 16.

But every cent makes a difference for Syrians, 90 percent of whom are below the extreme poverty line, according to the United Nations, in a country where the estimated average monthly income is SYP 92,000 ($21). 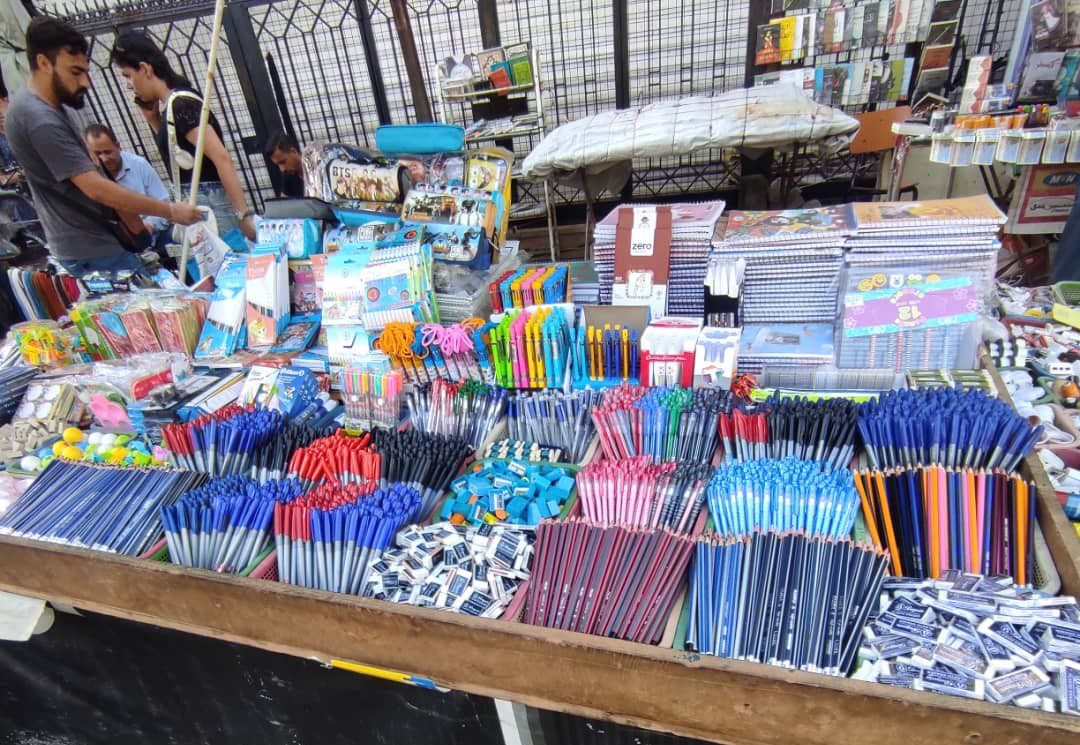 The economic repercussions of the war in Syria have caused more than 1.1 million students to drop out of education, most of whom are “between 15 and 24,” the Director of the Center for Educational Measurement and Evaluation in the Damascus Ministry of Education, Ramadan Darwish, said in December 2021. According to a January 2021 report by UNICEF, more than 2 million children are deprived of education in Syria.

Before school started, Mona, a 40-year-old Damascus resident, visited markets in Damascus with her husband “more than once, to estimate the costs of equipping our three children before the start of the school year,” she told Syria Direct.

After several trips, Mona, a chemistry teacher who makes SYP 150,000 ($34) a month, bought half of her children’s supplies. She made do with buying stationery and backpacks for SYP 170,000 ($38), and did not buy new school uniforms.

Mona said she feels “a lump in my chest,” at not being able to afford new uniforms. It would take a full month’s salary to buy them, so she has “promised to buy new clothing after the beginning of the school year,” she added. “I’m afraid I won’t be able to keep my promise.”

For textbooks, Mona bought a used set of books for her son, who is in the 10th grade, for SYP 12,000 ($2.70) from one of her colleagues, instead of buying new books for SYP 48,300 ($10.85). Two of her other children will receive new copies for free, as the Ministry of Education provides schoolbooks to students at required grade levels (elementary and middle school).

Abu Abdo and Mona could both benefit from stationery loans, interest-free loans available to public sector employees, and pay them back in installments throughout the year, provided they buy school supplies from the Syrian Trade Institution, the accredited state body that distributes subsidized goods across regime-controlled areas. Neither have done so. “They require a long process, not to mention the poor quality materials found in [Syrian Trade Institution] halls,” Mona said.

Shafiq Arbash, a professor of economics at the University of Damascus, in a statement to the pro-Damascus Al-Watan newspaper this month, criticized the quality of goods and products available through the Syrian Trade Institution, which he described as “a big lie.” The items on offer are from brands there is no demand for, “and Syrian consumers aren’t used to them,” he said.

In Damascus and other regime-controlled areas, Syria’s economic reality is reflected in the market. Khaled, a 45-year-old bookshop owner in the al-Baramka neighborhood of Damascus, told Syria Direct there was “a very low turnout this year, compared to previous years.”

Khaled attributed poor turnout to “the rising prices of stationary against people’s decreasing income due to inflation,” as well as competition from sidewalk stalls (bastat) scattered in the streets of Damascus. Sidewalk sellers “sell poor quality items for lower prices, but people come to them because they are looking for what’s cheapest,” he said.

Abu Abdo was one of many parents who bought their children’s supplies from the sidewalk stalls on al-Thawra street, seeking to pay the least amount of money possible. Still, it was a heavy burden. For his family to get by, he expects a “dark September,” with his family eating no meat, but “only bread, Indomie [instant noodles] and eggs.”