Syrians on UN: Regime struck convoy because ‘international order not holding it accountable’

In the 48 hours since a series of airstrikes destroyed a Syrian Arab Red Crescent convoy delivering aid to the rebel-held west Aleppo countryside on Monday, both the Russian and Syrian governments have denied responsibility for the attack. The airstrikes killed at least 15 people, including the head of SARC’s Aleppo operations, Omar Barakat.

On Tuesday, the United Nations, United States and International Committee of the Red Cross all initially described the incident as an airstrike. That, by extension, would likely implicate either the Syrian or Russian governments since opposition rebels do not operate aircraft.

But later Tuesday, following a series of statements by the Russian Ministry of Defense (MoD) denying involvement in the strikes, the UN walked back its initial statement, replacing the word “airstrikes” with “attacks.”

UN humanitarian spokesman Jens Laerke told reporters in Geneva Tuesday that the initial statement referring to an “airstrike” may have been the result of a “drafting error.” 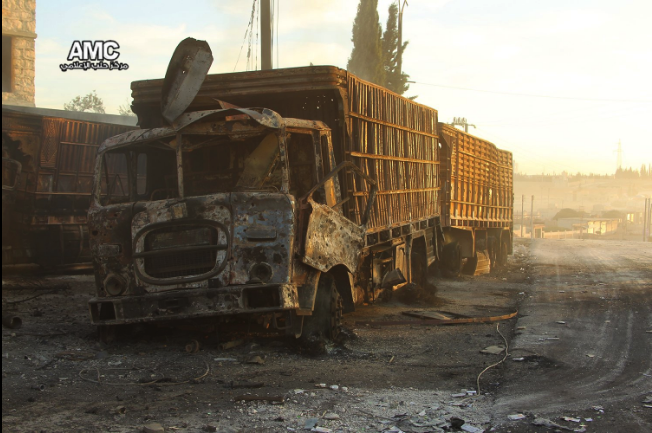 Here, four Syrians closely connected to the SARC bombing react to the UN’s verbal retreat, with the man who filmed the video of the attack telling Syria Direct’s Ammar Hamou: “If the regime thought there was an international order capable of holding it accountable, then it wouldn’t have struck the aid convoy in the first place.”

Abu Haitham, who recorded video of airstrikes hitting SARC aid convoy in Orem al-Kubra on September 19. He is a Thiqa Agency correspondent based in the west Aleppo countryside.

We are not surprised by the United Nations’ amended statements. If the regime thought there was an international order capable of holding it accountable, then it wouldn’t have struck the [SARC] aid convoy in the first place.

We recorded the initial moments of the attack on the convoy. The video showed that the strikes came from the air and included missiles, [helicopter] machine-gun fire and barrel bombs.

[Ed.: View Abu Haitham’s video of the early moments of the airstrikes on the SARC convoy here. In the video Abu Haitham yells “Regime forces are targeting aid trucks in Orem al-Kubra. 19 September 2016.”]

The Russian Ministry of Defense called the Syrian Civil Defense’s claims [regarding the airstrikes against the convoy] baseless.

This is despite the fact that, in our video report, we displayed pieces of a barrel bomb at the scene of the strike.

Firas Huriatani, citizen journalist based in the west Aleppo countryside.

Since the bombing, the Russians have been publishing new statements every hour—each one contradicting the last. Then the UN came out to define the event as “attacks” rather than “airstrikes,” which paves the way for accusations that rebels were somehow responsible for bombing the SARC convoy.

The United Nations’ amendment of its statement [to replace the word “airstrike” with “attack”] comes as no surprise. Every time the regime commits an atrocity, those in the UN respond with fiery statements. We used to think this meant that Bashar al-Assad was finished. But then the UN backs off its initial position and Bashar comes back to bomb us harder than he did before.

We can draw a parallel with the East Ghouta attacks [of 2013], when the regime killed more than 1,000 people with chemical weapons. The initial responses from politicians and UN officials made us think that Assad was done. But there he is, three years later, sitting on his throne.

February 06
Reconstructing the nation, one dome at a time

In a country like Syria, even something as seemingly benign as repairing a church or a mosque takes...
Read more...
May 29
At Cannes, Waad al-Kateab eternalizes the story of Aleppo during the Syrian revolution, s...

The photos are scarce. In one, a dozen or so women, young children and elderly men bite down on san...
Read more...
March 21
Afrin’s Kurds fear echoes of historic discrimination, as Turkish-backed authorities forbi...