A Palestinian resident of the Sheikh Jarrah neighborhood in the occupied East Jerusalem stands next to a wall graffitied with the phrase “We won’t leave” in Arabic. The image saw a significant reaction from Syrians, especially those displaced from their homes by the abuses and policies of the warring parties in Syria, 4/5/2021 (Facebook)

AMMAN — Although the war machine of the Bashar al-Assad regime and its allied Russian and Iranian forces continues to take the lives of Syrians and forcibly disappear thousands in detention centers, Syrians demonstrated in support of the Palestinian people facing Israeli aggression in occupied East Jerusalem and the Gaza Strip.

Many cities and towns in the provinces of Hama, Aleppo, Idlib, Daraa and others—as well as the Palestinian refugee camps in Syria—have witnessed demonstrations and protests denouncing Israeli hostilities.

This coincided with pro-Palestinian stances from Syrian opposition political bodies and figures. In an Eid al-Fitr message posted to social media, the National Coalition for Revolutionary and Opposition Forces wrote, “We affirm that the Syrian people stand alongside our brethren in occupied Palestine,” adding that “we stress the need for serious global action to stop the occupation’s aggression against the holy al-Aqsa Mosque and all Palestinian cities, especially Jerusalem and Gaza, and an end to the hateful occupation policies against the Palestinians.”

Syrian opposition figure Mohamad Sabra tweeted, “The deliberate destruction of residential buildings in Gaza by Israeli aircrafts is a war crime in international humanitarian law. Syrians, whose homes were destroyed by Bashar [al-Assad] and Iran’s militias, may be the most aware of the feelings and pain of a Gazan seeing their house collapse on their body and the bodies of their family and neighbors.” 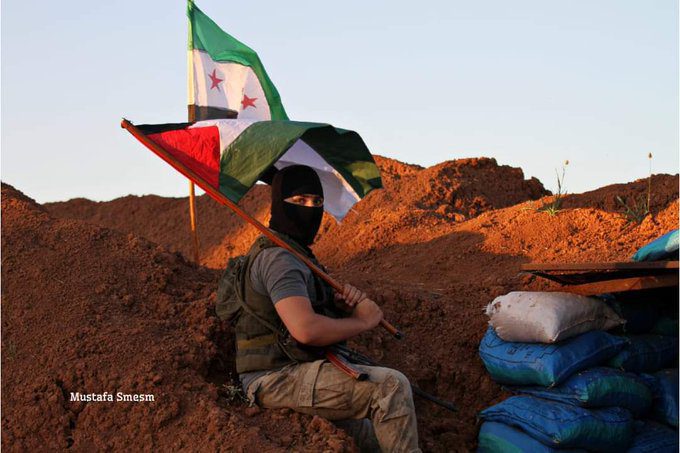 A Syrian opposition fighter on the frontline in the countryside of Idlib, northwest Syria, raises the Palestinian flag alongside the Syrian revolution flag in solidarity with the Palestinian people in the face of Israeli aggression against East Jerusalem and the Gaza Strip, 13/5/2021 (National Coalition for Revolutionary and Opposition Forces) 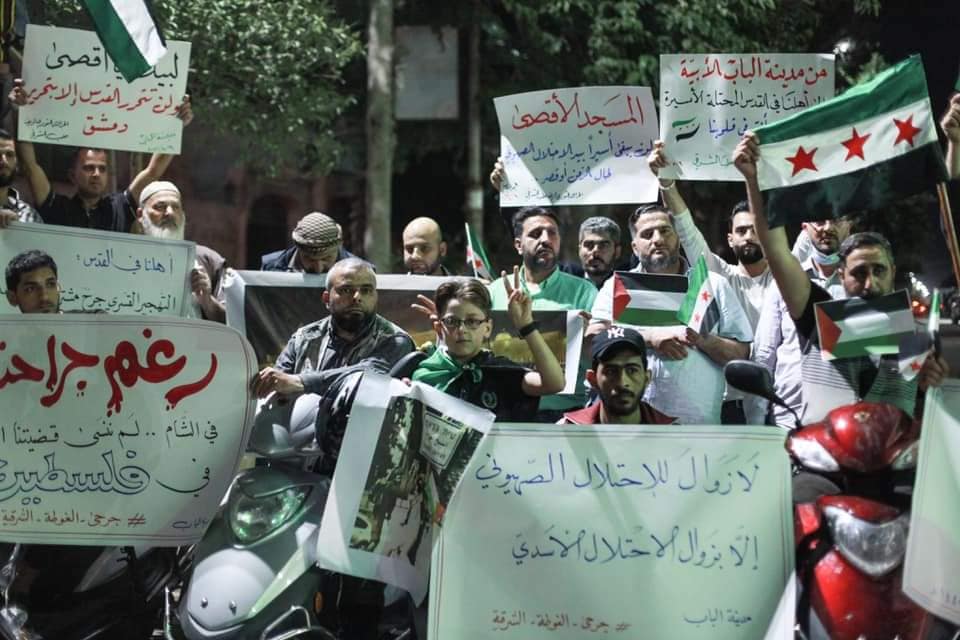 Syrians carry the flags of Palestine and the Syrian revolution, as well as signs expressing solidarity with Palestinians, during a sit-in in the Aleppo province city of al-Bab, 9/5/2021 (Facebook)

A mural by Syrian artist Aziz Asmar on the wall of a house destroyed by an Assad regime bombing in Idlib province expresses the steadfastness of the people of Jerusalem confronting Israeli attacks and refusing to leave their city, 8/5/2021 (Facebook)

Residents of the Daraa camp for Palestinian refugees in the city of Daraa protest in solidarity with Jerusalem and the Gaza Strip, 14/5/2021 (Horan Free League)

Syrians in the city of Idlib in northwest Syria carry Palestinian flags and signs in solidarity with Jerusalem and the Gaza Strip, 11/5/2021 (Mohamad Kazmooz) 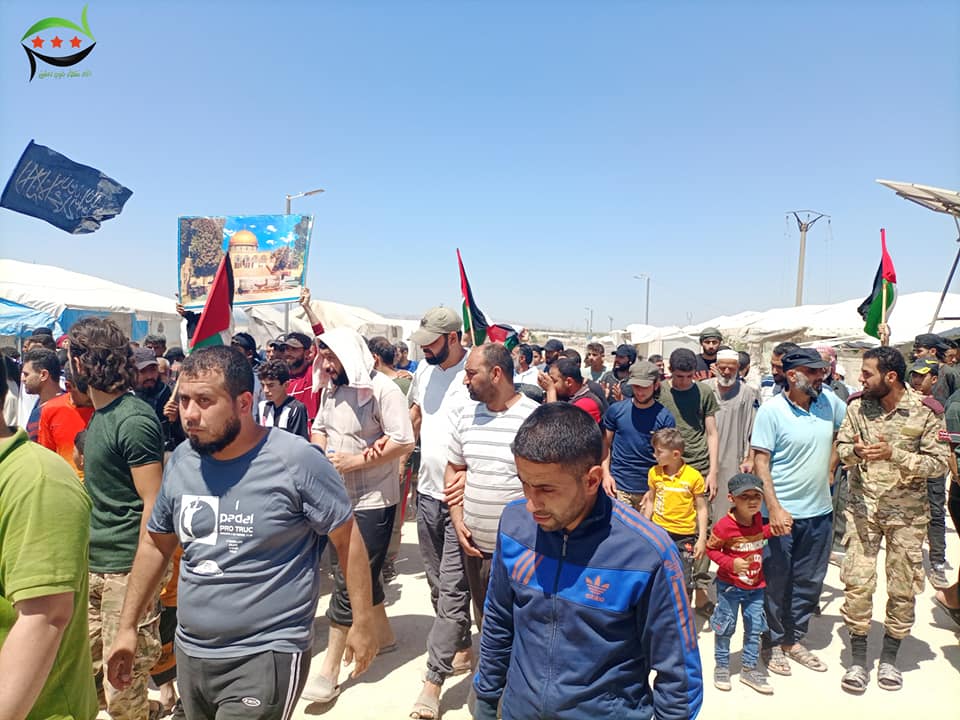 Displaced people in the Deir Balout IDP camp in the countryside of Aleppo province, which includes Palestinian refugees from Yarmouk Camp in south Damascus, demonstrate in support of Palestine in the face of Israeli hostilities against Jerusalem and the Gaza Strip, 14/5/2021 (Union of South Damascus Activists) 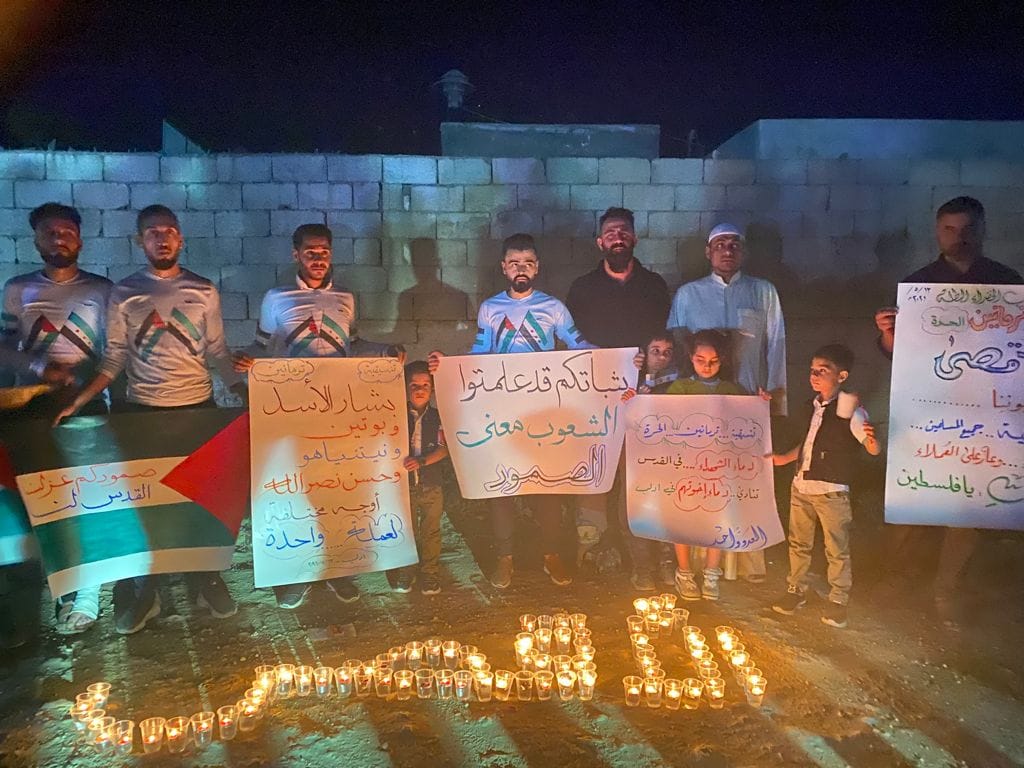 Syrians in the town of Tarmaneen in Idlib province hold signs and light candles in support of Palestine, 13/5/2021 (Tarmaneen Media Office)

A Palestinian holds a message showing the Syrian revolution flag in a picture taken in front of the Damascus Gate of the Old City of Jerusalem. The writing on it says: “From occupied Jerusalem to wounded Damascus, our hearts are with you,” 6/5/2021 (Internet)

This photostory was originally published in Arabic and translated into English by Mateo Nelson.