In the dark: Without electricity, life in Idlib’s informal displacement camps revolves around the sun (Photos)

IDLIB — Once a week, Fatima Khaled al-Rahmoun, 45, spends three hours washing clothes by hand, “piece by piece.” If she had electricity, “and a washing machine, I would finish the washing in half an hour, with no effort,” she said.

Four years ago, Fatima, her husband and their children fled their home village of al-Tah, in the southern Idlib countryside, today controlled by the Assad regime. Today, they live in an informal camp, named for the village they fled, near Maarat Misreen in northern Idlib. Since they were displaced, the family—like hundreds of others living in similar camps—have lived without electricity.

On laundry day each week, Fatima carries water “by bucket, from the main water tank 20 meters away from my tent,” she said. “This is the hardest part, and it could be avoided by having an electric pump to bring water to the tent.”

Fatima Khaled al-Rahmoun washes clothes by hand in front of of her tent in al-Tah camp, near the town of Maarat Misreen in the northern Idlib countryside, 15/9/2022 (Abd Almajed Alkarh/Syria Direct)

In northwestern Syria, 311,782 people live in 514 informal displacement camps, according to the Syrian Response Coordination Group. They are a fraction of the 1.8 million total displaced people living in 1,633 camps in the area.

Displacement camps, especially informal ones like al-Tah, lack humanitarian aid and services. Since al-Tah camp was founded four years ago, it has had no electricity, said Abdulsalam al-Yousef, the camp’s director. “We can’t run mazot [locally refined diesel] generators inside the camp, for fear of fires breaking out in the tents,” he explained. 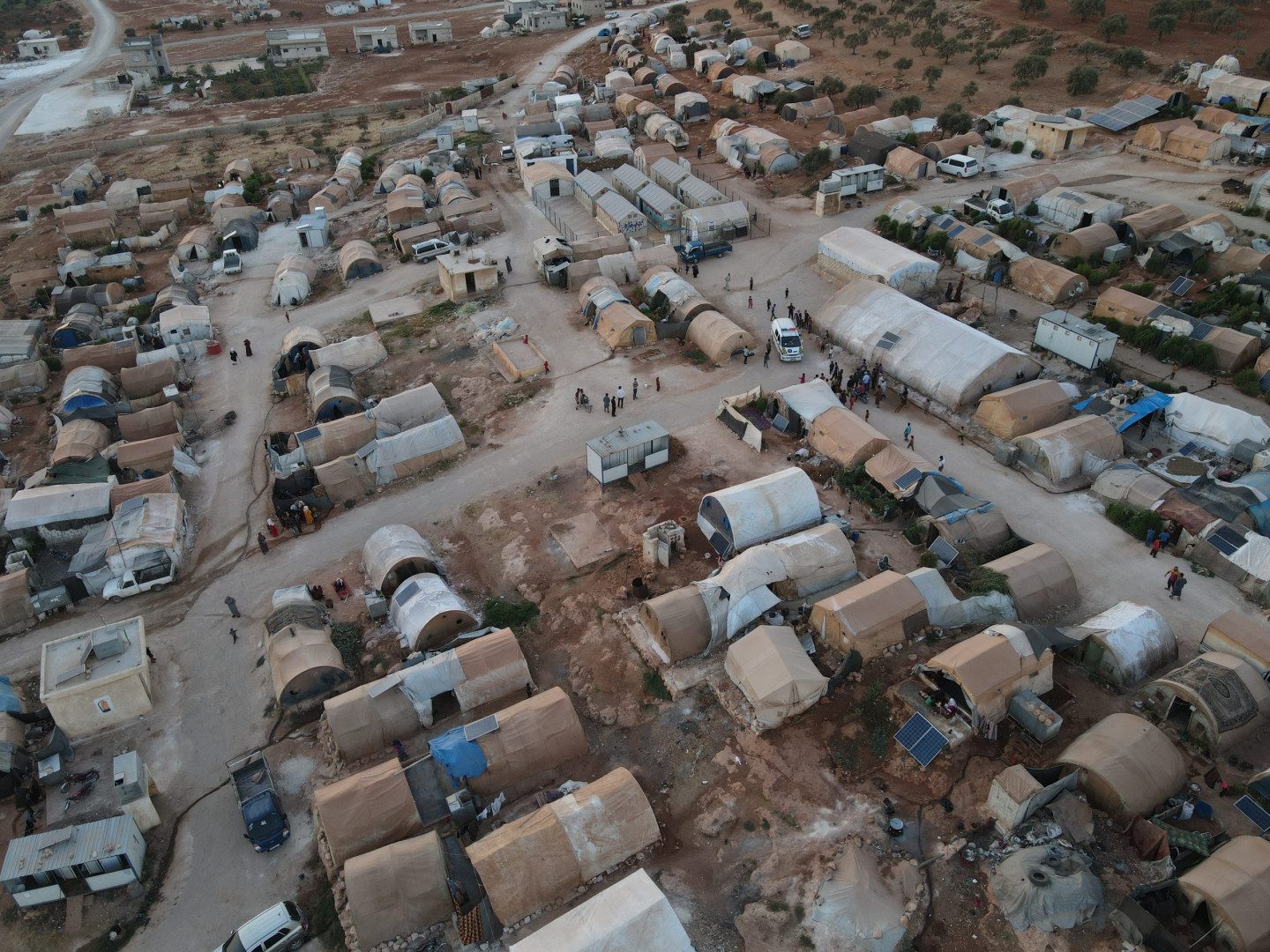 Solar panels are one alternative source of energy, but many displaced people living in informal camps cannot afford them. Installing a solar energy system costs around $700, including panels, batteries and an inverter. “We lost everything, we can’t afford to buy [solar] panels,” Fatima said.

“Anyone who sees pictures of us on television or the screen of their mobile phone, they might wonder, how do these people live?” he said. 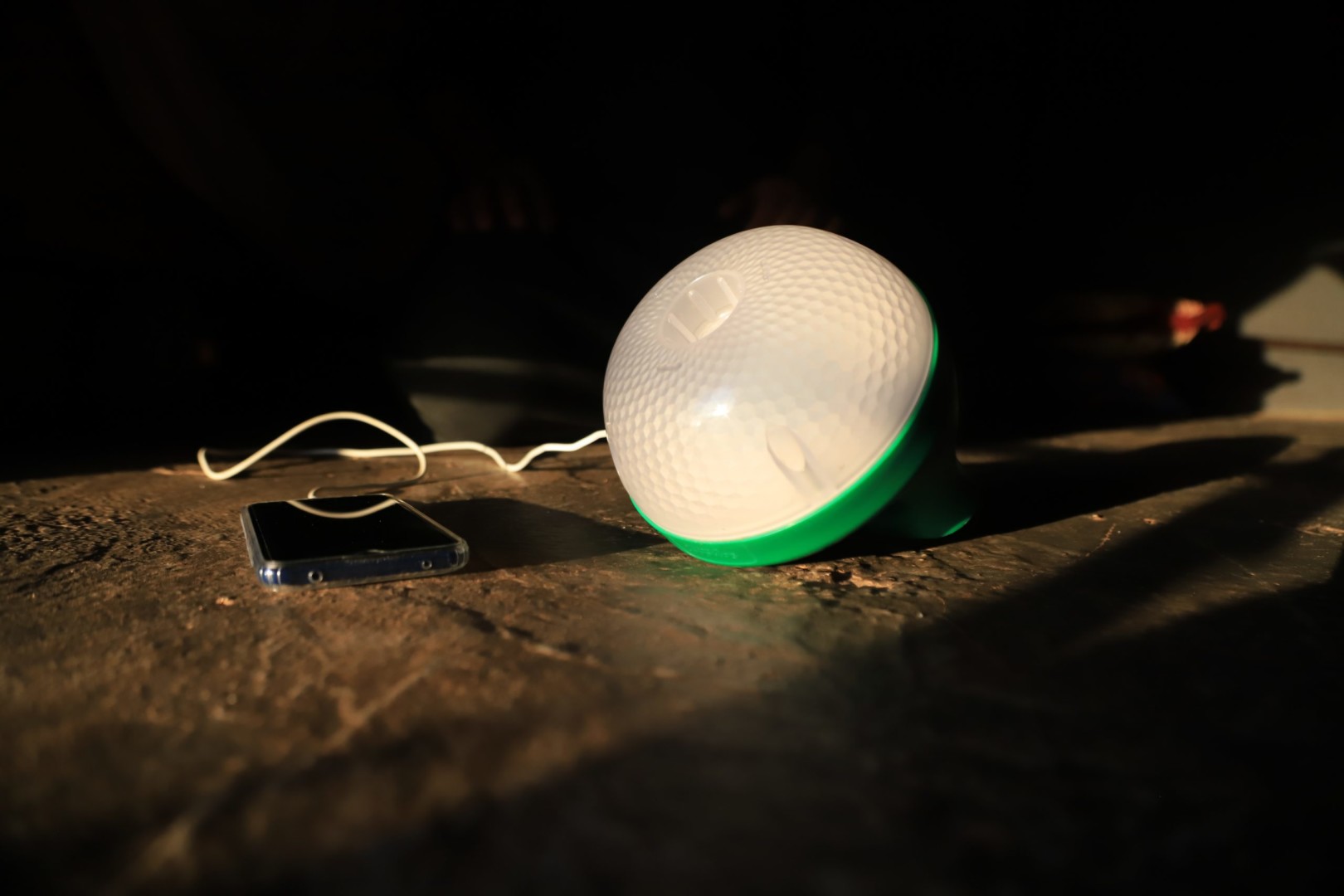 Yousef Ramadan’s solar lamp, which he uses to light his tent and charge his mobile phone, 15/9/2022 (Abd Almajed Alkarh/Syria Direct)

Without electricity, the camp’s residents battle “the darkness” daily. As winter approaches, “there is less sun, and the winter is long,” Fatima said. She lights her tent with a small solar-powered lamp. “If the sun is shining, we can use the lamp in the evening. If the sun goes down and we haven’t been able to charge it, we spend our night in darkness.”

Fatima sits with her neighbors in front of her tent in al-Tah camp, northern Idlib, 15/9/2022 (Abd Almajed Alkarh/Syria Direct)

Occasionally, Fatima uses a small light on one end of the gas lighter she uses to build fires. But she only uses this light “when necessary, because it is very dim and you can barely see.”

“When one of my children needs to use the shared bathroom outside the tent at night, he steps on his sleeping brothers because he can’t see anything,” she added. When her children bathe, she accompanies them “to light the bathroom with the lamp.”

Fatima has a mobile phone, which, like Yousef, she charges with a solar lamp. But its charge is barely enough to light the tent, so “my mobile might go days without charging,” she said. “This has been our life for four years, can you imagine that?”

Women leave the camp less frequently than men, and “suffer doubly without electricity in the camp,” Yousef said. “I charge my phone at the medical point or education center nearby.”

Without light, after the sun goes down, most of the 300 families—around 1,750 people—do not stay up. Fatima’s sons go to bed “after sunset,” she said. Solar lamps only provide light for the first few hours of the night, Yousef added. 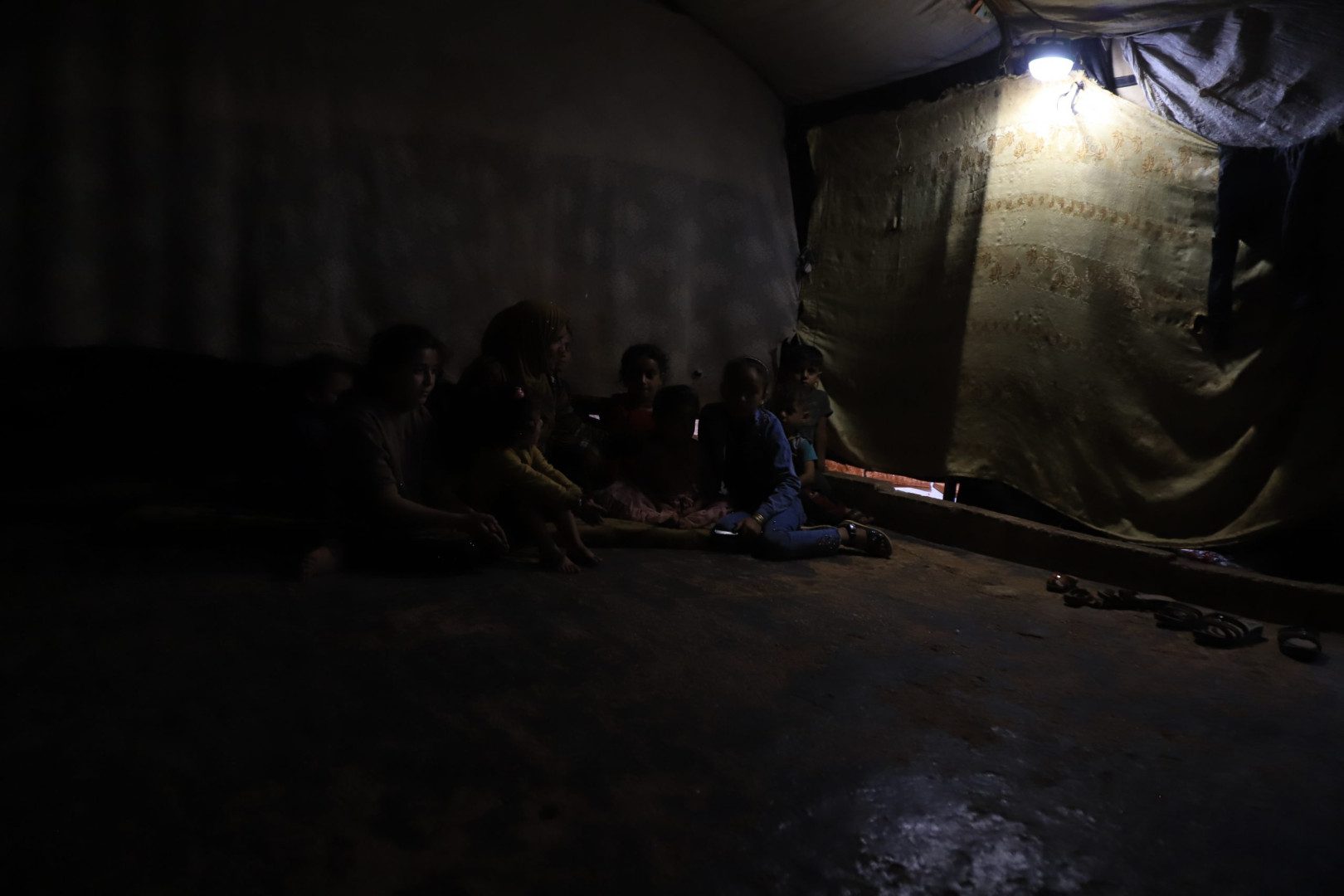 Several camp residents have fractured bones, “especially those with disabilities and the elderly, because there isn’t enough lighting at night when they go to the toilets,” said camp director Abdulsalam al-Yousef. Mothers and fathers make extra efforts to accompany their children at night, “for fear of wild dogs and hyenas,” because al-Tah camp “isn’t fenced,” unlike official displacement camps.

The director has reached out to groups to support the camp with solar panels or batteries for electricity and lighting, “but we haven’t received any response so far,” he said.

In the winter, dark comes early. In the summer, no electricity means “we can’t prepare more food than our daily needs, because it spoils without a refrigerator,” Yousef said. And “there are no fans in the hours of extreme heat.”

One summer day, Fatima tried to save some leftovers, “because the monthly food basket we receive doesn’t cover our needs.” But “the food went bad, and we were poisoned,” she recalled.

Sometimes, Yousef’s thoughts drift to life outside the camp, and to people who “have a laser cooker and watch screens, while we light a fire with garbage.” The comparison saddens him.

Fatima’s mind goes to a similar place. She wondered, “are we humans like them?”