Disabled Syrian children in Jordan: Exclusion from education exacerbates the difficulties of asylum

Ruqayyah, who suffers from bowed legs, is helped by her mother at their home in the Abu Nseir area of the Jordanian capital Amman, 2/3/2021 (Syria Direct)

AMMAN — Women gather to drink morning coffee at an apartment in a housing complex with a beautiful view of the northern Abu Nseir area, a suburb of the Jordanian capital Amman. It is a seemingly  ordinary and familiar scene. However, all these women are widowed Syrian refugees who fled the grinding war in their homeland to seek safety for themselves and their children.

The complex, where children play and have fun on the stairs, houses 17 Syrian widows and their children. While a Kuwaiti charitable organization covers the rent, the women and their children rely solely on World Food Program (WFP) aid cards (coupons) and benefactors whose support has been reduced due to the fallout of the COVID-19 pandemic. But these resources “don’t cover the cost of education and health care, especially for those whose children have special needs,” Umm Ahmad, one of the women living there, told Syria Direct.

“I won’t be around forever. What will happen to my son if something happens to me?” Umm Ahmad, 34, summed up her fears surrounding the future of her eldest child. Ahmad, 18, has been deprived of education because of a motor disability he has had since childhood.

In 2004, before Ahmad was one year old, his mother noticed that his legs’ movement was unusual. The reason, it was later revealed, was a mass putting pressure on a sensitive area of his spinal cord, causing paralysis in his lower body and confining him to a wheelchair. According to doctors, there is little hope for an operation to remove the tumor.

Nonetheless, Ahmad, who lost his father to a heart attack in 2009, studied at schools in the countryside of Homs until the fourth grade, when his mother fled to Jordan with her five children, including Ahmad, due to the war in Syria. After spending time in northern Jordan’s Zaatari Refugee Camp, the family moved to the widows’ housing six years ago with the help of one of her husband’s relatives in Amman.

Since then, Ahmad’s anxious mother’s attempts to enroll him in any school near her home have not stopped. But they have all been met with refusal, as she said. Despite the approval of the UNHCR and the Jordanian Ministry of Education, public schools are not equipped for students with motor disabilities. Meanwhile, exorbitant fees prevent him from enrolling in a private school.

Determined to save her son from the clutches of the illiteracy she suffers, Umm Ahmad has no choice left but to enroll Ahmad in Qur’an memorization sessions at local mosques “to master reading and writing Arabic,” she said, “with the hope that he can teach others to memorize the Qur’an as a way to guarantee him an income that will free him from having to ask people [for help] in the future.” 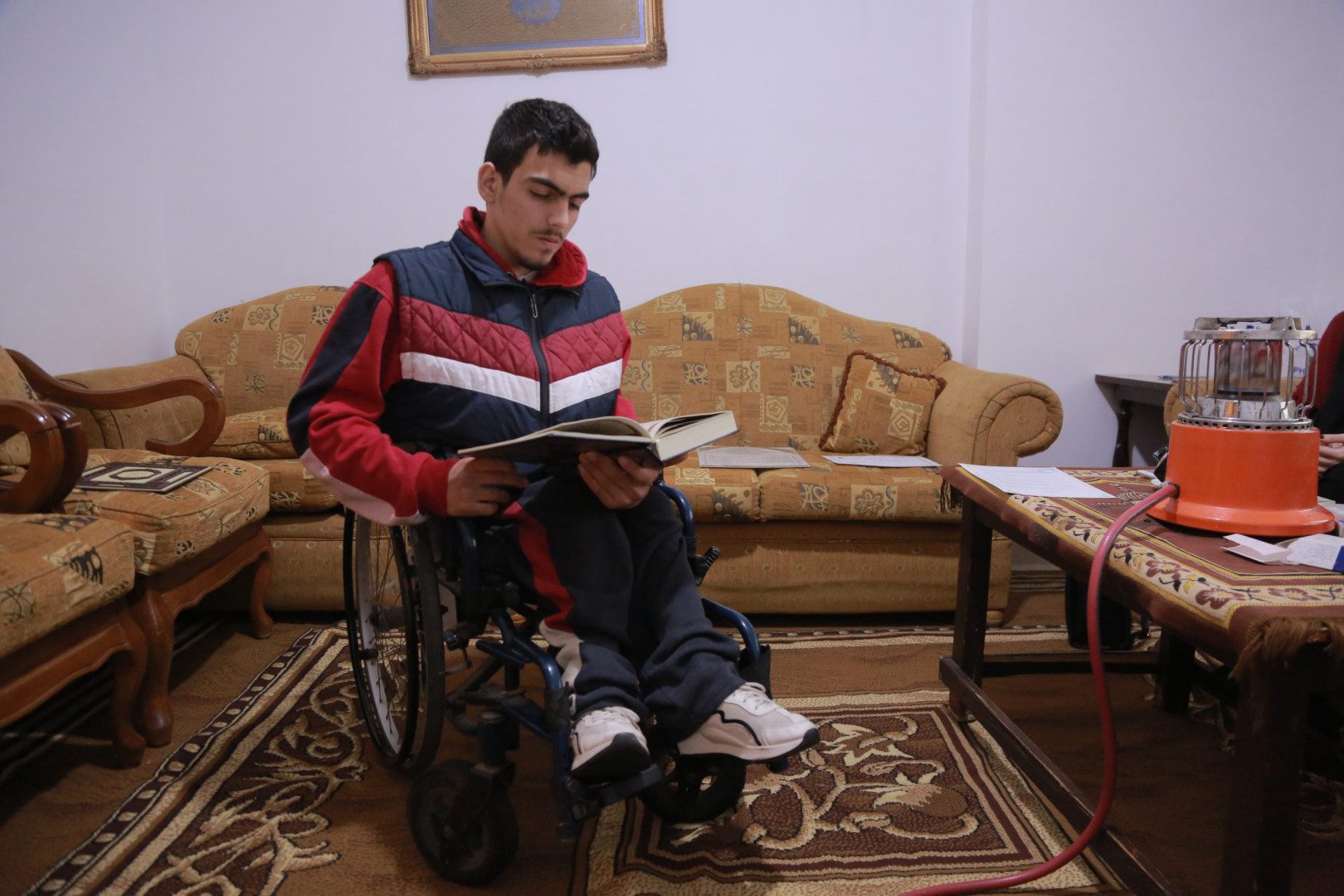 Ahmad sits in his wheelchair and recites verses from the Qur’an at his home in the Abu Nseir area of the Jordanian capital Amman, 2/3/2021 (Syria Direct)

Suffering of another kind

In the apartment below Ahmad’s, Ruqayyah, 16, sits in front of the television in the living room. Her legs, wrapped in plaster and gauze, are stretched out on a small table after she underwent an operation to correct her bowed legs.

Doctors expect that Ruqayyah, who has had cerebral atrophy and weak nerves in her legs since birth, will walk with the help of a walker after the latest operation if it is followed by intensive physiotherapy sessions. That could allow her to enroll in school after being unable to do so for years because of her disability.

“This is the fifth operation on Ruqayyah’s legs: two in Syria and three in Jordan,” her mother, Huda Salloum, a refugee also from the countryside of Homs, told Syria Direct.

But Salloum, who arrived in Jordan in 2012, collected JOD5,000 (approximately $7,502) for her daughter’s operation from donors. But she cannot afford the cost of physiotherapy. The total she receives from the iris scan system (used by the UNHCR to provide cash assistance to refugees) is JOD125 (approximately $176). This, combined with WFP coupons, is barely enough to cover the expenses of her and her three children, including Ruqayyah.

Salloum worries she will not be able to continue carrying her young daughter around the house, as well as to doctors’ clinics, after more than ten children’s carriages used to move her broke in past years. She does not have a wheelchair suitable for her age.

Since 2007, Jordan has adopted a Law on the Rights of Persons with Disabilities to replace the Protection of the Disabled Law No. 12 of 1993. The law that was amended in 2017 specified the governmental institutions responsible for adapting facilities for a comprehensive action plan to integrate people with disabilities. However, the law is “great on paper,” as Deputy Director of the Middle East and North Africa Division of Human Rights Watch Michael Page described it, “but it means nothing for people with disabilities if the government will not put it into practice.”

This gap is especially pronounced in education. Article 17 of the law stipulates that “it is forbidden to exclude someone from any educational institution on the basis of, or because of, disability.” However, in reality, people with disabilities continue to struggle with integration difficulties, and the law’s amendments have not achieved their goal.

A 2015 study issued by the Department of Statistics found that one out of every nine individuals in Jordan over the age of five has a disability, a rate of 11%.

Since 2008, the UNHCR, in coordination with the Jordanian Fund for Human Development, has implemented the “Determination” project that targets Syrian refugees, among other nationalities, and “seeks to improve the quality of life of people with disabilities from the day they are born until their 59th year, as well as elderly people over the age of 60,” Muhammad Hawari, the spokesperson for the UNHCR in Jordan,  told Syria Direct.

As part of the project, “the UNHCR provides medical devices—mobility aids—through a fieldwork team made up of a physical therapy specialist, psychological counselor and special education teacher,” Hawari added. It also provides “rehabilitation services and physiotherapy sessions to allow the beneficiaries with disabilities to reach functional physical, sensory, intellectual, psychological and social levels and maintain them through transfer to accredited rehabilitation centers.” There are also “two sanitary pad services and psychosocial support activities.”

Out of around 664,000 Syrian refugees in Jordan registered with the UNHCR, approximately 26,000 people, or 3.5%, have disabilities, Hawari revealed.

While the women drink their morning coffee and the young children play in the stairwell, Ahmad sits in his chair before a window overlooking the street next to his home, watching the bus carrying his two blind neighbors, Najam and Amir, to and from the Abdullah ibn Umm Maktum School for the Blind. Meanwhile, Ruqayya wonders if she will get a wheelchair. Until the dream of integration of people with disabilities is realized and they are empowered with their rights, including the right to education, Ahmad and Ruqayya will continue to wait.