In northwestern Syria, a ‘good’ wheat harvest, but trouble on the horizon (Photos)

A combine harvester empties wheat into a cart during the harvest of land belonging to farmer Abdul Munim Asaad in the Sahl al-Roj area of the western Idlib province countryside, 28/6/2022 (Abd Almajed Alkarh/Syria Direct)

IDLIB — Several days ago, Abdul Munim Asaad finished harvesting his wheat fields in the Sahl al-Roj area of the western Idlib countryside. This season was “good” compared to last year, due to high rainfall, he said.

Each dunam (approximately 900 square meters) of Asaad’s 22 dunams of land produced 400-500 kilograms of wheat this year, which is “the average production of farmland in the area. Last season was worse, as each dunam produced “less than 350 kilograms,” Asaad said. 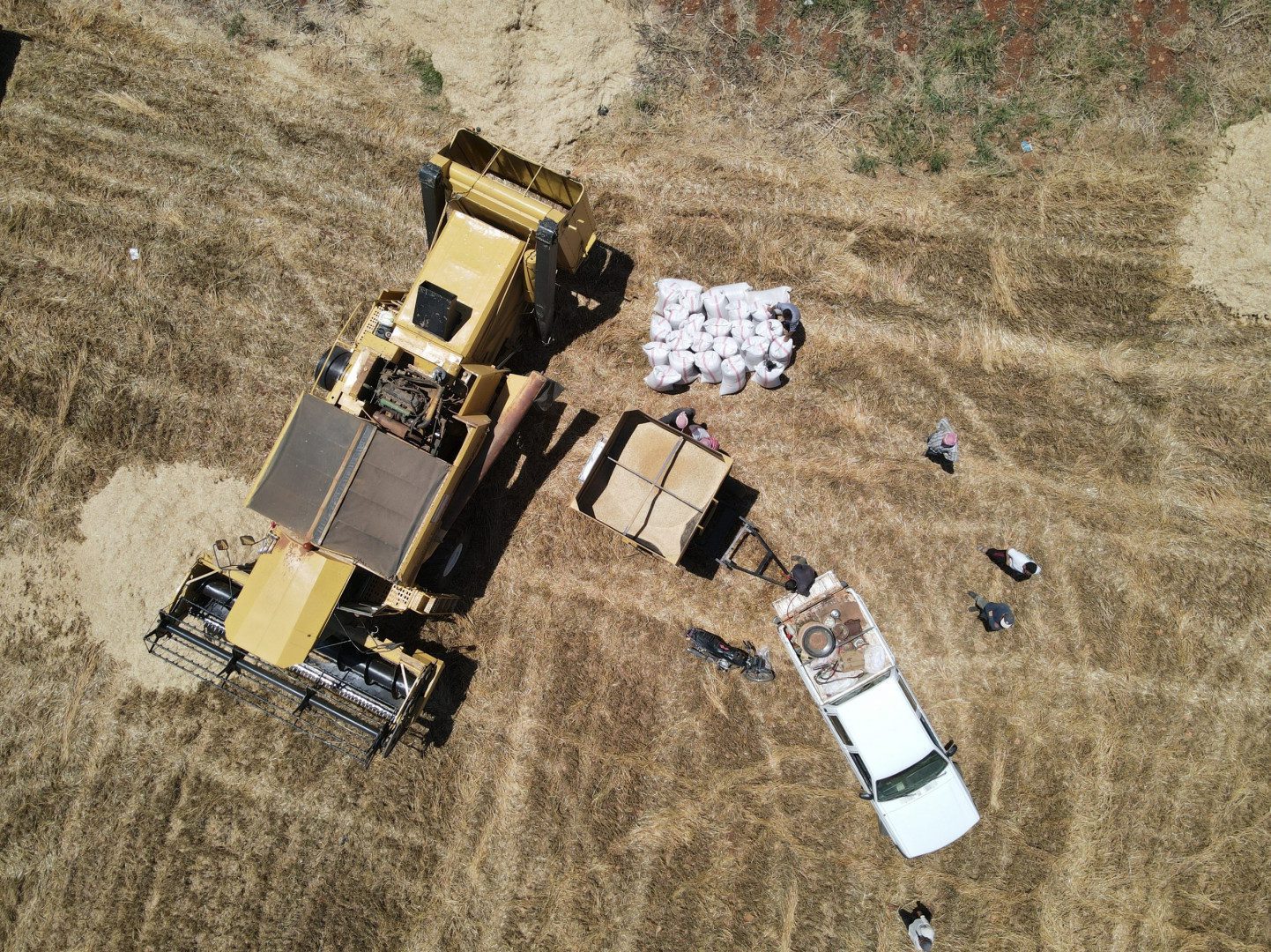 An aerial view of Abdul Munim Asaad’s land during the harvest and packing of wheat, 28/6/2022 (Abd Almajed Alkarh/Syria Direct)

Wheat production is affected by “different weather [conditions], drought, diseases, and the type” of wheat grown, Asaad explained. Some farmland produces up to 700 kilograms of wheat per dunam.

Although Asaad is satisfied with this season’s harvest, the total wheat production in the areas of Idlib province controlled by the Hayat Tahrir al-Sham (HTS)-backed Salvation Government this year “covers four months of the region’s needs,” according to the public relations director at the Salvation Government’s Ministry of Economy and Resources, Hamdo al-Jassim. “The liberated [opposition] areas need to import additional quantities of wheat to achieve self-sufficiency.”

Usually, the shortfall is compensated “through imports from foreign countries,” al-Jassim said. But this year, “the Russian-Ukrainian war has affected wheat imports globally in terms of availability and price due to increased demand, since Ukraine, one of the biggest exporters, stopped exporting it.”

Farmer Asaad started this year’s harvest in late June, unlike past years when he harvested at the beginning of the month to avoid any risk to his crop. Previously, “I started the harvest early, at the beginning of June, for fear of fires breaking out due to shelling or other reasons, such as high temperatures.” He did so even though “an early harvest reduces the amount produced.”

In Syria, wheat ripens at the beginning of June and is ready for harvest. It is “better” to delay the harvest, however, as “it becomes more mature, and the land gives greater quantities,” Asaad said. Still, some farmers harvest early due to the “poor security situation” and the fear of “losing the entire crop to fires.”

Muhammad Hassan Naseef, a fellow farmer in the western Idlib countryside, started early this year. He began harvesting between June 3 and June 8 “so as not to be hit by shelling or fires, especially since we have no way to protect our crops,” he told Syria Direct.

Like Asaad, agriculture is Naseef’s sole source of income, and wheat is his most important crop. So there can be no risk, even if an early harvest impacts the amount produced. 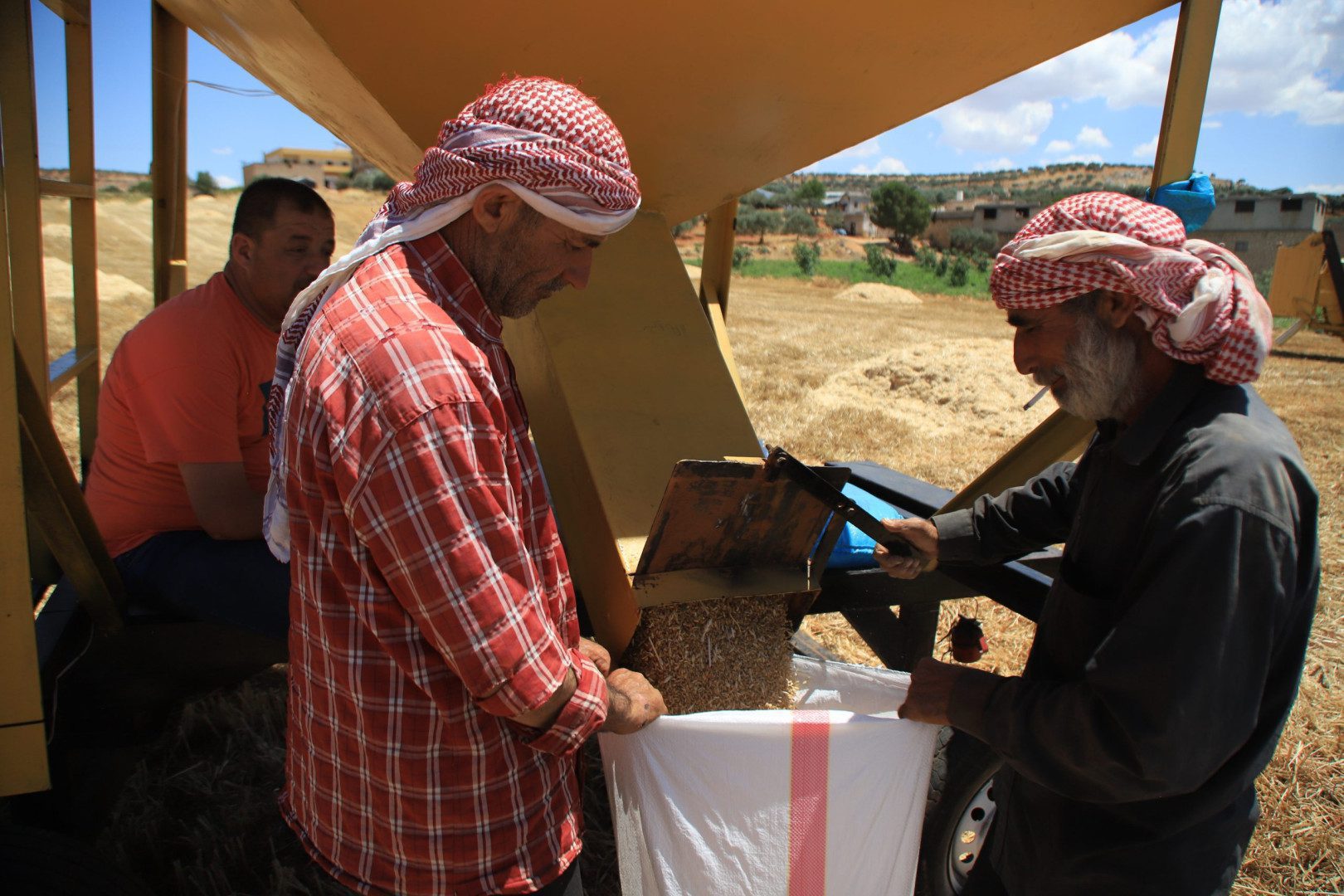 Naseef has already lost his entire crop once. “Four years ago, fire devoured the entire crop,” he recalled, describing what happened at the time to a “race” as “the combine went in front of the fires to salvage what wheat could be saved before the fire got to it.”

Every year, fires break out on farmland growing wheat in northwestern Syria. Most recently, two fires broke out in the Sahl al-Roj area of western Idlib—near Abdel Munim Asaad’s land—on June 7, according to the Civil Defense, also known as the White Helmets.

During the harvest season, Civil Defense fire brigades are on alert, and raise their readiness to deal with any fires as they occur. They also post awareness fliers about reducing fires through their official social media accounts. 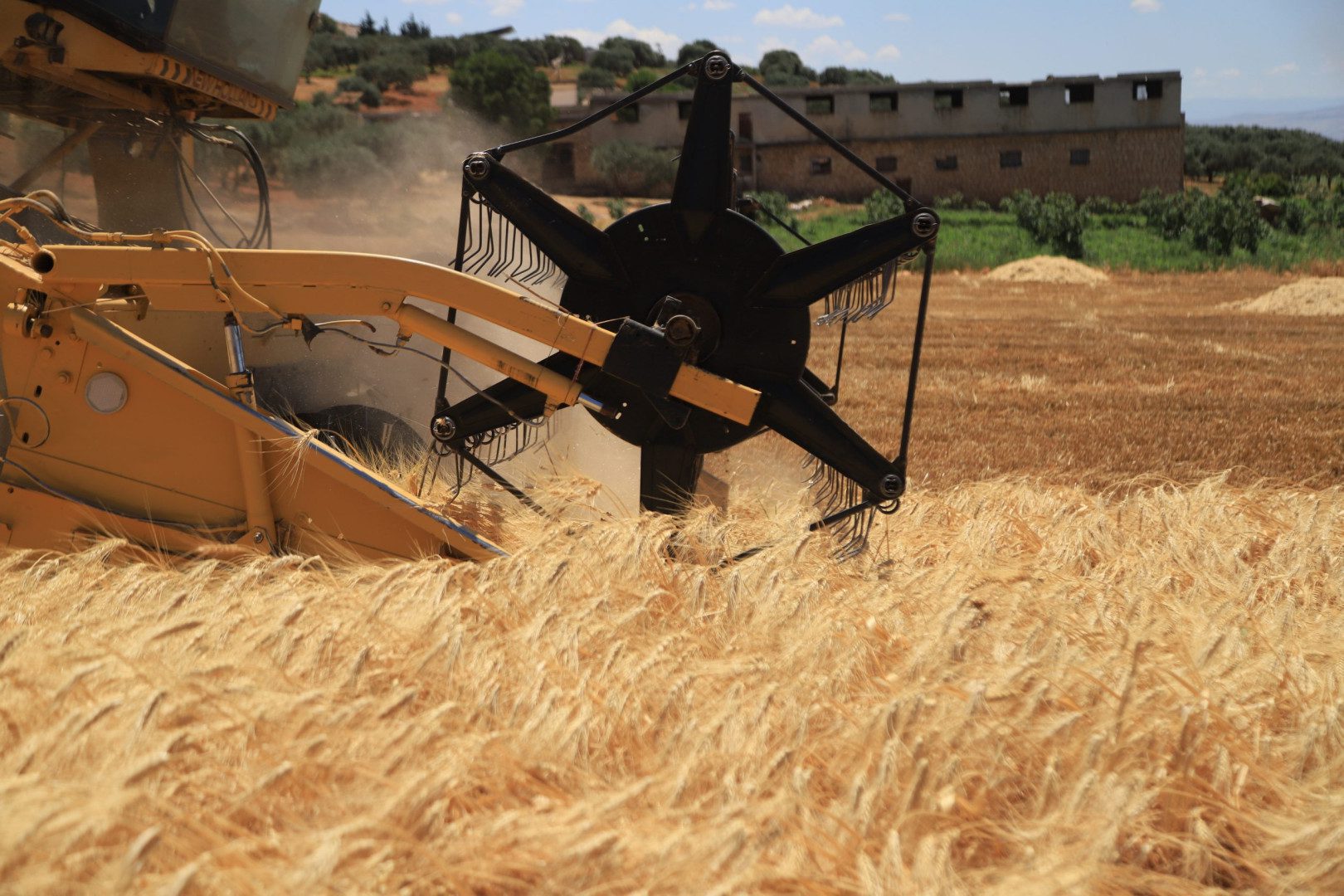 Alongside the impact of an early harvest, wheat production is hit by other factors, including the cost of fertilizers. Naseef used to use 40 kilograms of fertilizer on each dunam of wheat, but today he uses 15 kilograms per dunam, as “the cost of one ton of fertilizer ranges from $800-900,” he said.

“The combine only takes the highly mature plants, so an early harvest is one factor in low wheat production,” Asaad said. This can also lead to “a lack of hay needed as food for cows and sheep,” leading to “an increase in hay prices and harm to people who raise animals, who are forced to sell their livestock for cheap prices since they can’t afford to feed them.” The price of one kilogram of hay in the area has risen from 2 Turkish lira ($0.11) to 9 TRY ($0.52). 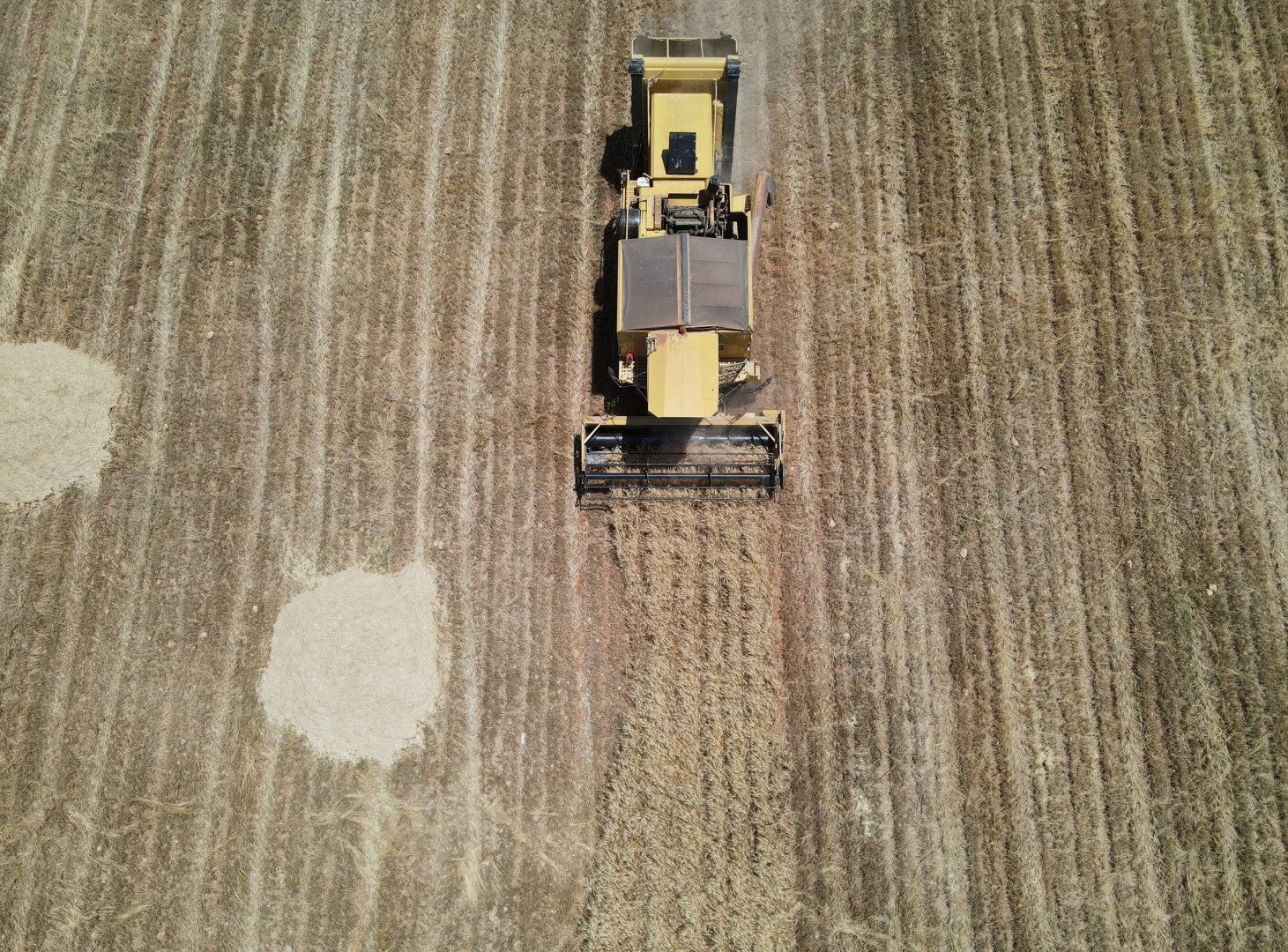 Danger of a different kind

Fires—whether started by accidents, natural phenomena or shelling—are the greatest danger for farmers and threaten the food security of northwestern Syria’s population. More than four million people live in the opposition-held area, half of whom are internally displaced.

But there are other forms of danger that are no less impactful on  the population, which suffers from difficult economic and living conditions. One is the practice of smuggling wheat crops out of opposition-controlled areas in search of better prices. 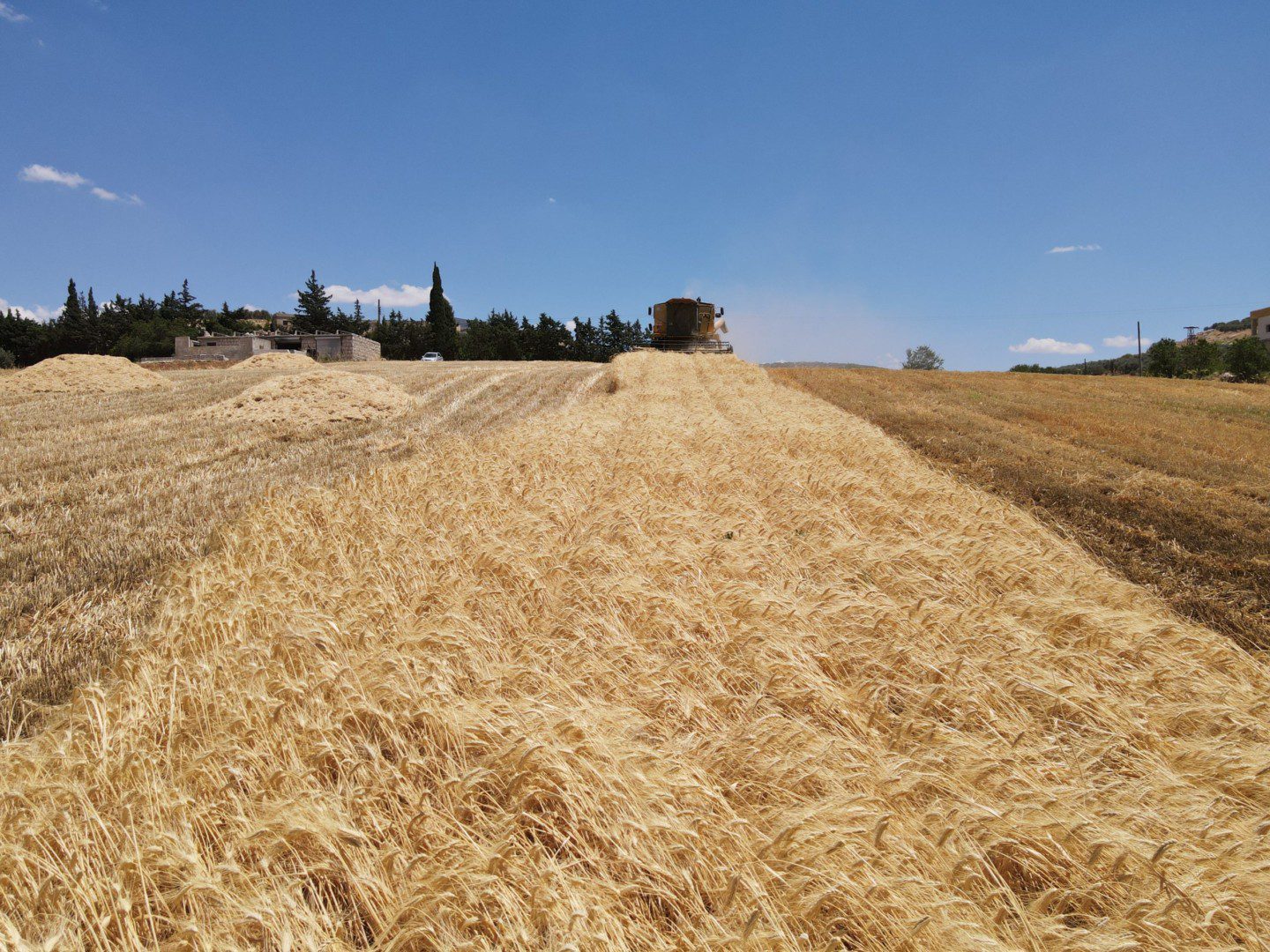 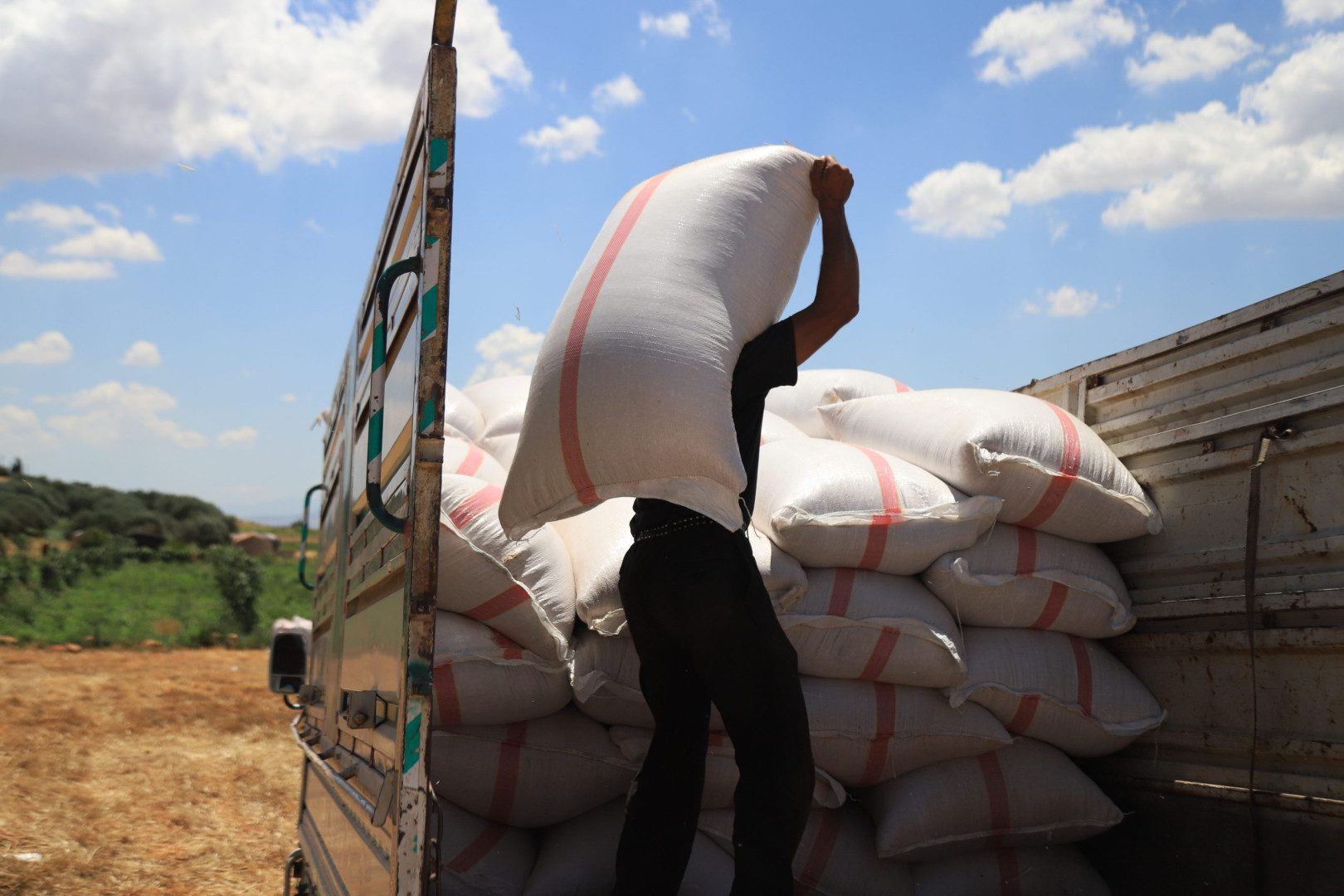 A worker lifts a bag of wheat into a truck for transport from Abdul Munim Asaad’s land, 28/6/2022 (Abd Almajed Alkarh/Syria Direct)

However, the price is still lower than other areas of influence in Syria. The Autonomous Administration of North and East Syria (AANES) has set the price of one ton of wheat at $550, while a ton sells in regime areas for $500.

Naseef would prefer to sell his crop outside the region too, but it is not possible for him. “My land produces less than 2.5 tons, which is little” in comparison with the price difference in other areas of influence, not to mention that moving it outside the area “requires securing a route and having contacts in other areas to sell it there,” he said. 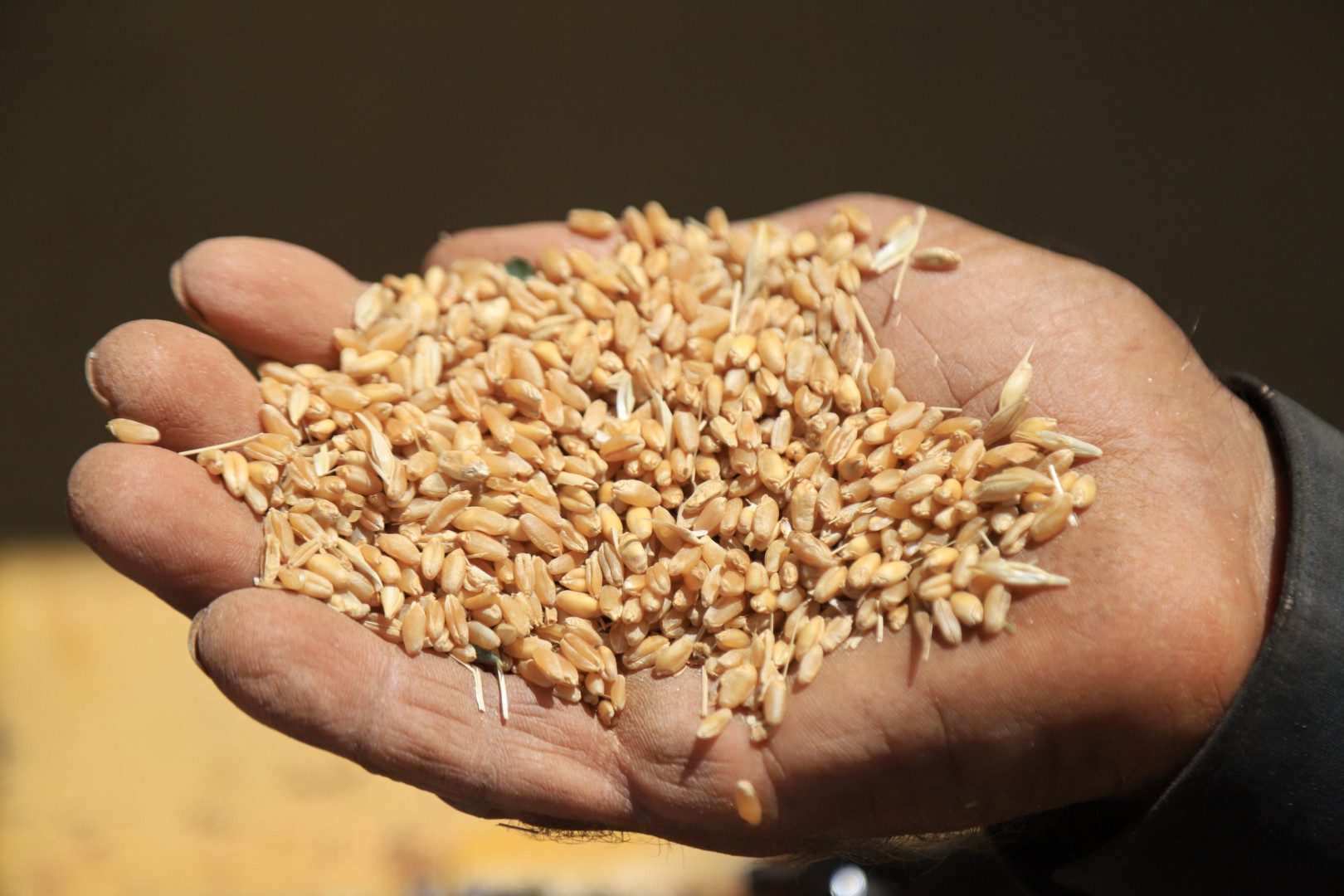 A worker holds a palmful of wheat after harvesting it from Abdul Munim Asaad’s farmland in western Idlib, 28/6/2022 (Abd Almajed Alkarh/Syria Direct)

Due to farmers’ interest in selling their crops outside northwestern Syria, voices have been raised denouncing the practice. The opposition Free Syrian Lawyers Association, which is active in northwestern Syria, said in a June 30 statement that it considers wheat smuggling a “criminal act” that could “portend a catastrophe that threatens the lives and fates of these areas’ inhabitants.”

The association called on “the existing authorities, especially the [Syrian] National Army, to take full responsibility for protecting the Syrian people’s sustenance” and to pursue wheat smuggling operations currently underway.