Trapped in the desert, Syrians trade in rare birds

PARIS — Smiling broadly, a middle-aged man stands in the Syrian desert, clutching a live falcon. Elated, he bends to the ground and presses his forehead against the sandy soil in a thankful gesture, his fist still firmly grasping the bird’s legs.

Caught on video, the scene was shared with Syria Direct along with scores of photos taken by residents of Rukban, a remote informal displacement camp located at the border between Syria and Jordan. One image shows a man with pepper-gray hair crouching next to a falcon tied to a heavy blanket. In another, dozens of tiny birds lie dead on a long white table.

For the men, the photos are prized souvenirs that bring back memories of intense happiness and transitory luck. Catching birds is one of the few activities that still brings joy—and money—to the 10,000 displaced Syrians living in Rukban, who live stranded in an arid no man’s land, forgotten by the world and cut off from humanitarian aid.

But for conservationists and bird-lovers, such images are a gruesome reminder that the illicit trade in endangered birds continues to flourish in Syria despite the war, pushing dozens of rare species towards extinction.

Rukban is located close to a US military base guarding a 55-kilometer-wide “deconfliction zone” in southern Syria, just inside the border with Jordan. Besieged by the Syrian regime, the camp experiences constant shortages of medicine and food, which is smuggled in at prohibitive prices. Humanitarian organizations almost never reach the camp: the last UN aid delivery came in September 2019, and was only the third since January 2018.

Each year, oblivious to conflict lines and borders, millions of migratory birds fly above the heads of Rukban’s residents, who remain stuck in the desert, awaiting aid that never comes.

Rukban also lies at the heart of one of the world’s largest migratory flyways, connecting Europe and Asia to Africa. Each year, oblivious to conflict lines and borders, millions of migratory birds fly above the heads of Rukban’s residents, who remain stuck in the desert, awaiting aid that never comes.

Still, this passage is a blessing. Throughout the summer, entire flocks of small birds fall prey to gluey nets and traps set by hunters near trees and water points dotting the desert. If the catch is good, rare feasts are eaten and some birds are even smuggled out of the camp to be sold. Sandgrouse, sand plovers, and many rare species are part of the catch, but the most prized birds are by far falcons.

Dozens of birds are caught at once using nets and glue-covered sticks, and eaten whole (Rukban residents/Syria Direct)

“Falcon hunting was the hobby of our ancestors, and almost everyone who did not practice it before has learned it in Rukban,” Ahmad*, a camp resident who has been trapping falcons for over twenty years, told Syria Direct.

The trapping season runs from late August to November. Each year, several hundred men head out into the 55-km deconfliction zone for weeks on end, setting up camp near suitable spots. They scan the sky starting at dawn, the falcons’ preferred hunting time, and roam the desert for hours hoping to spot a bird.

When a falcon is spotted, the trappers release live bait (usually a pigeon) that carries a trap made of wire nooses on its back. If the poachers are lucky, the hungry raptor swoops down on the bait and claws into it, immediately getting caught in the trap. Weighed down by its prey and unable to free its talons from the tangle, the falcon is eventually forced to land. Racing across the desert in a 4×4, trappers try not to lose sight of the panicked bird and to lay their hands on it.

“Trapping falcons becomes a crazy obsession that you can’t get rid of, even if it’s a very expensive hobby,” Ibrahim*, a Rukban resident, told Syria Direct. Trapping parties can last the entire season and cost up to $2,000 per car (usually split between four people), including expenses for fuel, equipment, food and the trapping devices (around $1.5 per trap).

Despite the high cost of entry, trapping attracts many. It gives men a reason to leave the camp, an opportunity to reconnect with an idealized cultural heritage built around life in the desert, and a chance to recover a sense of purpose and dignity despite the misery of Rukban.

Most importantly, falcons spark hopes of immediate wealth and changed fates. They can sell for tens of thousands of dollars on illegal wildlife markets in the region.

In Rukban alone, six falcons were sold last year for prices ranging from $1,000 to $25,000, camp residents said. This is a fortune in the camp, yet remains well below the price paid by the final owner of the bird.

The falcons caught in Rukban are auctioned off over the phone to interested buyers, usually bird traders from al-Rahiba, a town located 50km northeast of Damascus and known as the “capital of falcons.” At least 170 bird traders once operated in al-Rahiba before the start of the war, making it the largest marketplace for falcons in Syria. Their business still thrives across the conflict lines and the merchants, who are located in a regime-held area, continue to receive birds from all corners of Syria—including areas not controlled by the regime, such as Raqqa.

Once sold, arrangements are made to take the bird to al-Rahiba via the handful of smugglers that normally bring staple foods to the camp, bribing their way past regime checkpoints. In al-Rahiba, the falcons are advertised on online marketplaces and sold to final buyers, generally in the Gulf.

The selling price of each bird varies according to its species, age, size and appearance. Younger birds are preferred because they are more easily trained by their new masters. Four species of falcons are commonly traded: the saker and peregrine falcons, two migratory species caught in the fall, are the most prized by falconers and sell for $6,000 to $60,000 on average. Lanner and barbary falcons, two resident species, are considered less valuable.

Jordan, Syria and the Gulf states are all parties to the Convention on International Trade in Endangered Species of Wild Fauna and Flora (CITES), an international agreement that forbids the trade of rare and endangered species—including falcons.

Still, falcon trapping and trading runs rampant in all of these countries. The situation was “dramatic” in Syria even before the war according to Nashat Hamidan, a birdwatcher who heads a rehabilitation center for rescued raptors managed by the Jordanian Royal Society for the Conservation of Nature (RSCN).

Falcon trapping is “a booming market, a big business powered by wealth in the Gulf.”

Hamidan recalls that he was shocked by the prevalence of falcon trapping during an assessment of birdlife in the countryside of Aleppo, in 2008. “In a single village, nearly all the men took part in falcon trapping! We saw at least ten groups looking for falcons, and keep in mind each group includes at least a dozen men,” Hamidan told Syria Direct.

At the start of the war in 2012, Syria already exported at least 300 falcons a year, a figure likely to have been largely underestimated, since most birds are smuggled illegally. The transactions took place more or less in the open, owing to the near-total lack of law enforcement and the trivial penalties imposed on hunters: a fine of SYP 50 to 250 ($1 to $5) and jail time ranging from a few days to two months.

The past decade of conflict is likely to have made the trade more attractive than ever before: nature protection agencies are in shambles, law enforcement is nonexistent, and international smuggling networks have flourished between Syria and Lebanon, facilitating the sale of falcons abroad. Skyrocketing unemployment and rising poverty also mean poachers have growing incentives to hunt.

Across the entire region, falcon trapping is “a booming market, a big business powered by wealth in the Gulf,” Fares Khoury, the chairman of Jordan Birdwatch, a Jordanian organization dedicated to the protection of birds, told Syria Direct.

Falconry—using trained birds of prey to hunt other species of birds—was long a traditional sport of elites in Saudi Arabia, Kuwait, the Emirates and Qatar. As wealth grew, owning more falcons became a way for some to assert social status. From the 1950s onwards, this demand fueled an unprecedented growth in falcon trapping across the Middle East that continues to this day.

Falcon farms have been created to legally breed, train and export falcons. But despite the availability of captive-bred birds, many falconers prefer to own wild-caught falcons. The reason? “Prestige. It’s a way to show off, like having a nice car,” Khoury said.

Most falcons caught in Rukban end up crossing back through the same desert in which they were caught in order to reach their final destination in the Gulf—a strange completion of their southward migration. 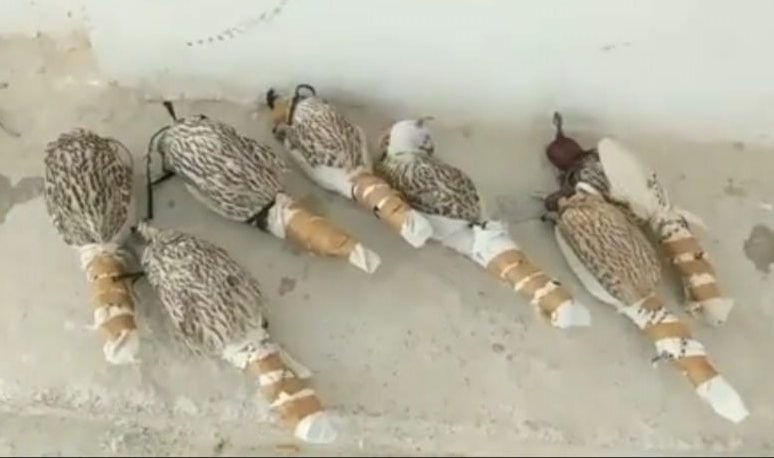 Fewer birds have been trafficked through Jordan during the war, owing largely to the long closure of the border with Syria. However, plenty of trafficking routes remain open, perhaps wider than ever before. Many traffickers send the birds to Lebanon and then fly them by plane to the Gulf. Some are exported “legally” with forged certificates stating they are captive-bred. Others are simply drugged, packaged and smuggled without being declared.

Most of the birds that appear in photos shared by Rukban’s residents were identified as rare and protected species by ornithologists interviewed by Syria Direct. Although comprehensive data on bird populations in the region has been difficult to collect in recent years, experts share a clear sense that many of these species are in decline locally, if not globally.

Sandgrouse, which are caught for food, are not yet in danger of extinction but populations are declining rapidly (Rukban residents/Syria Direct)

Yet trappers in Rukban and elsewhere across Jordan and Syria are seldom aware of the disastrous ecological impact of their hobby. Most see it as a traditional sport, highlighting that they only catch a handful of falcons and respect certain hunting traditions. “Hunting in the spring is morally prohibited because the birds lay their eggs, and we respect this time in order to preserve their reproduction,” Issam*, a trapper from Rukban, told Syria Direct.

“Falconry is traditional, but not of this magnitude.”

But even if each individual’s impact is limited, there are simply too many trappers. “Falconry is traditional, but not of this magnitude,”  Khoury stressed. “Now, it’s a big business,” feeding a tentacular illicit market involving hundreds of falcon-trappers, middlemen, smugglers, trainers and buyers.

“I don’t know how many years it’s been since we last saw a lanner falcon in Jordan. It used to be a resident in the deserts. And the barbary falcon was relatively common, but now it’s decreasing in many areas,” Khoury lamented. Migratory saker falcons are endangered and might be heading towards extinction due to trapping, while pressure is growing on resident bird populations such as lanner and barbary falcons.

And the practice also has knock-on effects on other species. “The falcons are used in high-end Arab hunting parties, going for example to Azerbaijan and Central Asia to hunt and kill other rare birds,” Tomas Axén Haraldsson, a freelance conservationist affiliated with the Ornithological Society of the Middle East, the Caucasus and Central Asia (OSME), told Syria Direct.

Falcons are “part of the famous folklore and symbols of the region,” Haraldsson said, and a “very valuable part of natural heritage.” Many falcon-trappers would readily agree. After all, falcons embody strength and resilience in a harsh desert environment, two qualities dear to the residents of Rukban.

*Names have been changed to preserve the trappers’ anonymity.